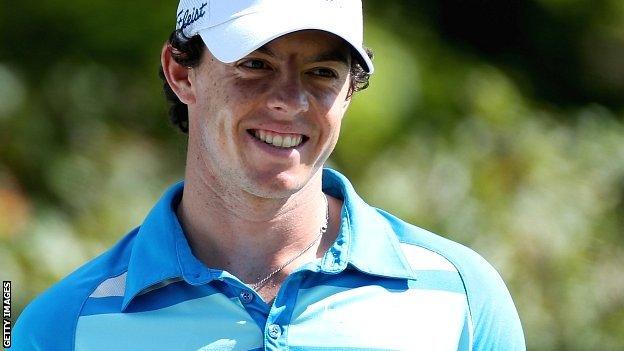 World number one Rory Mcllroy carded a final-round 67 to win the Deutsche Bank Open by one shot and clinch his third PGA Tour title of the year.

The Northern Irishman, 23, overturned Louis Oosthuizen's three-shot overnight lead to finish on 20 under in Norton.

South African Oosthuizen carded a 71 to finish one shot ahead of Tiger Woods, who shot 66 at the TPC Boston course.

Lee Westwood finished tied for 13th on eight under, Luke Donald ended on five under and Ian Poulter was at one under.

"I'm delighted to get my fifth win on the PGA Tour, third win this year, second win in the last three events," said McIlroy, who won the PGA Championship by a record eight strokes three weeks ago.

"I just wanted to get off to a good solid start and maybe put Louis under a little bit of pressure.

"I was able to do that playing the first holes three under, and we both made a couple of mistakes on the fifth hole, but he made a six to my five, so I was able to take advantage of that a little bit."

Former Open champion Oosthuizen steadied his round with a run of seven straight pars before birdies on the 13th and 15th hauled him back within a single stroke.

Both players bogeyed the 17th, but a par on the last was enough to give victory to McIlroy, who overtakes American Nick Watney at the top of the FedExCup points list.

Only Woods, with 15, has won more PGA tournaments than McIlroy before the age of 24.

"My game is starting to come around," said Woods, who has now earned more than $100m (£63m) on the Tour. "I'm pleased with the progress I made this week and really pleased with the way I rolled it. I hit so many good putts all week long, so that's a positive."

The leading 70 players on the FedExCup points list after this event advance to the BMW Championship, with the top 30 then progressing to the Tour Championship finale in Atlanta, where the overall points winner pockets a $10m (£6.3m) bonus.

Phil Mickelson also had a 66 to finish tied for fourth, along with Dustin Johnson, who is hoping to make the United States Ryder Cup team.

Brandt Snedeker's final round of 67 could also earn him one of Davis Love's four captain's picks when the US team is named on Tuesday.