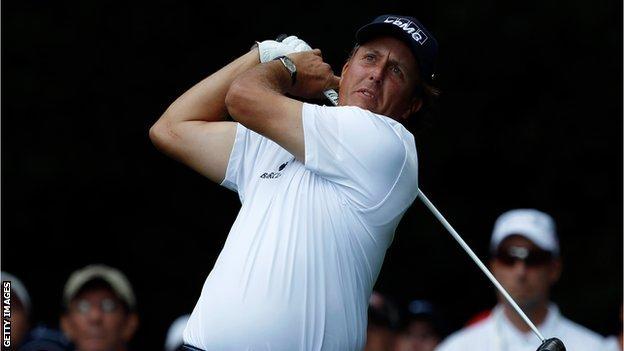 Both are 16 under, though Fiji's Singh would have entered the clubhouse a shot clear but for a bogey on the 18th.

World number one Rory McIlroy carded a 69 to go 15 under, tied second with Englishman Lee Westwood, who shot 68.

Tiger Woods (-13) and Ryan Moore (-11) dropped back after being within a shot of Singh at the start of the day.

But it will be the veterans Mickelson and Singh who will partner up for the final round after the pair produced sparkling rounds.

Mickelson, 42, has one Tour victory to his name this year and put himself in contention by making up five shots to draw level with 49-year-old Singh, who won the last of his 34 PGA Tour titles in 2008.

"It's taken me a little while to piece it back together, but I could tell last week that my game was back and I was ready to play at the highest level again," said four-time major winner Mickelson.

"I came out Thursday and forced it a little too much on the front nine. But after that, I've been able to settle down and play some good golf. I'm looking forward to tomorrow's shootout. It should be fun."

Northern Ireland's McIlroy, 23, will enter the final day in confident mood, after winning two of the past three PGA Tour events and finishing his third round in Carmel with a birdie on the 18th.

"Somehow I turned a 76 into a 69 today," tweeted McIlroy after Saturday's round. "Did some good work on the range this evening. Excited for tomorrow to try and win my second in a row."

Westwood continued to have a steady tournament, carding a four-under 68.

"This week is a fair, honest test and the cream has risen to the top. Hopefully I can play well tomorrow and come out on top of that," said the 39-year-old.

Woods shot a disappointing 71 and admitted to feeling some discomfort on the course. "I had two awkward shots. My knee doesn't like those," he said.