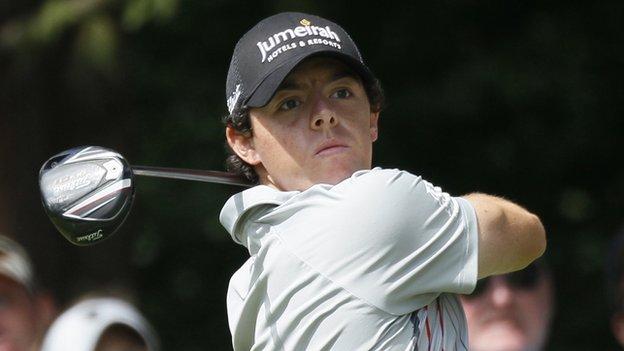 Rory McIlroy produced a final-round 67 to secure the BMW Championship and his third Tour victory in four outings.

The Northern Irishman finished 20 under in Indiana, two shots clear, and looked in superb form with the Ryder Cup less than three weeks away.

The American, 18 under, was a stroke clear of two compatriots, Tiger Woods and Robert Garrigus.

Overnight leader Vijay Singh fell away with a one-over 73 in his final round, leaving the veteran still searching for his first Tour win since 2008.

But Tour success is not in short supply for world number one McIlroy, 23, who combined long and straight drives with composure on the greens to register his seventh top-three finish of 2012, and fourth victory.

McIlroy has already won one of the four PGA play-offs this year - last week's Deutsche Bank Championship - and will be among the 30, including Woods and Westwood, who will reconvene at Eastlake in Atlanta, Georgia on Thursday, 20 September for the final event of the series.

"It is good to be able to win events like this when the quality of the fields are so good," said McIlroy.

"I felt like I was on my game more last week but I scrambled well yesterday to give myself a chance going into today," said McIlroy. "I did some great work on the range last night and and set myself up beautifully to attack those pins today.

"I knew if I played to my ability I would win events but I didn't think everything would come so quickly. I am on a great run at the moment and just want to keep it going as long as possible."

Two-time play-off winner Woods, who will come up against McIlroy when the USA face Europe in Medinah, Illinois in the Ryder Cup at the end of the month, shot a back-nine 33 in a four-under final round of 68.

"But I had to go lower than that. Rory is putting on a show out there and we've got one more tournament."