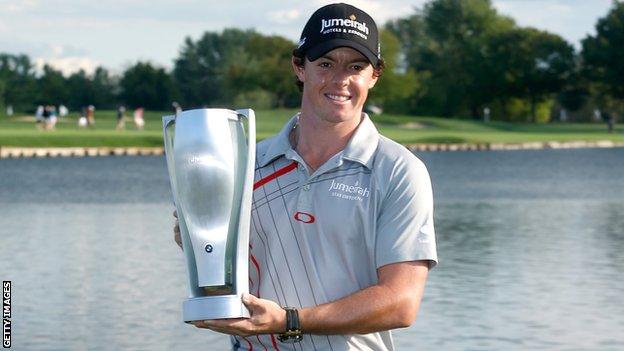 Rory McIlroy still faces a major battle to land the £7.15m bonus which will go to the winner of the PGA Tour's play-offs despite clinching his second consecutive win in the US on Sunday.

Under the competition's rules, the play-offs points tallies are now reset heading into the Tour Championship.

The new standings sees McIlroy with only a 250-point lead over Tiger Woods.

A win for either Woods, Nick Watney, Phil Mickelson or Brandt Snedeker would see the victor taking the £7.15m pot.

The four Americans are immediately behind McIlroy in the reset standings with the top five the only players in control of their own destiny heading into the concluding Tour Championship at East Lake in Atlanta from 20-23 September.

In theory, any of the 30 players in the Atlanta field can land the play-offs bonus.

Bill Haas went into last year's Tour Championship 25th in the standings but his victory at East Lake and a combination of other finishes saw him landing the play-offs title and £7.15m bonus.

All that seems harsh on McIlroy who had build a huge lead of 3,232 points in the series before the reset button was hit on Sunday evening under the play-offs' complicated rules.

Graeme McDowell and Padraig Harrington will not be in the field at East Lake.

McDowell's hopes of squeezing into the top 30 went sunk by a closing 78 in the BMW Championship on Sunday as his compatriot McIlroy clinched victory.

2010 US Open winner McDowell finished 42nd overall in the series - one spot above Harrington who was 10 shots behind McIlroy after a closing 73 at Crooked Stick.

But while McIlroy still has work to do in Atlanta, he will surely go into the event as favourite having banked more than £2.7m in the US over the last month after three victories.

McIlroy's triumphs over the last four weeks began with his eight-shot triumph at the US PGA which was followed by his Deutsche Bank Championship and BMW Championship play-off wins.

The Northern Irishman now has six PGA Tour wins - the same number that Nick Faldo and Seve Ballesteros managed in their entire careers.

McIlroy plans to spend a relaxing few days in New York this week which is scheduled to include a training session with the New York Knicks basketball team.

"I'm making the right decisions out there and everything is really just going to plan at the minute," McIlroy said.

"Some suggested that I could have taken a week off and still could have been in the top five in the FedEx Cup standings going into Atlanta.

"But I felt like I was playing really well and didn't want to stop."