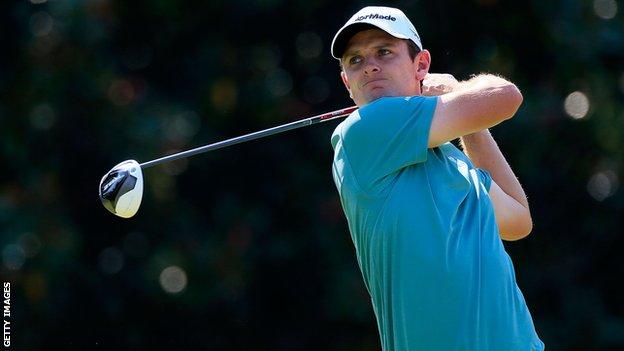 Justin Rose is tied for the lead with Brandt Snedeker after the third round of the PGA Tour Championship.

The Englishman is eight under par after shooting a round of 68, but American Snedeker put himself in the frame in Atlanta after a superb round of 64.

Northern Ireland's Rory McIlroy is three shots behind the leaders after a two-under round of 68, level with Bubba Watson and overnight leader Jim Furyk.

Tiger Woods moved up to joint-seventh, four adrift, after shooting a fine 67.

Fellow American Ryan Moore lies second, on six under, after carding the second best round of the day, a five-under effort of 65.

Snedeker's move up the leaderboard puts him contention not only for the PGA Tour Championship, but also for the FedEx Cup.

The American, who led this year's Open at the halfway mark before eventually taking a share of third place, is one of five players who are in with a chance of taking the $10m (£7m) bonus with victory in Atlanta.

The others are McIlroy, Woods, Phil Mickelson and Nick Watney.

"To hit 17 of 18 greens in this wind on this golf course, you're striking your ball pretty good. I'm very excited about the standings going into tomorrow," said 32-year-old Snedeker.

Rose, 32, said he intended just to focus on winning the Tour Championship, rather than worrying about the complex permutations which will decide who takes the FedEx Cup.

He said: "The whole year we've been grinding for the FedEx Cup, and it's still possible.

"It's not an easy golf course. Things can happen out there. But for me, it's about one tournament.

"I wish I was in the situation that Brandt's in. I would trade him, but obviously, that's the position I'm in."

McIlroy, who has won three of his last four tournaments, said: "It's one of those courses where I don't think anyone is really going that low. I might need one and hopefully I have saved it for the last day."