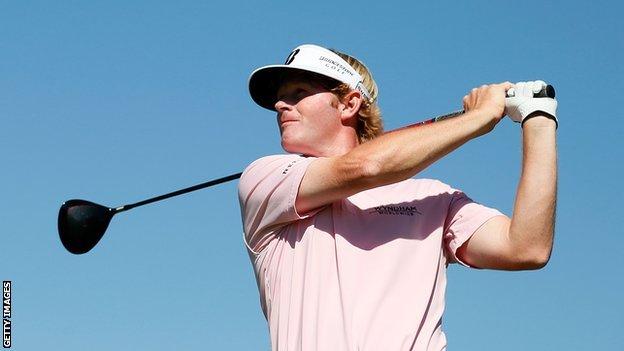 Brandt Snedeker held his nerve to comfortably win the PGA Tour Championship in Atlanta, and with it the FedEx Cup jackpot of $10m (£6.15m).

Snedeker, 32, shared the overnight lead with England's Justin Rose, and shot a two-under-par 68 for 10 under overall.

Rose (71) holed a long putt on the 18th for second, three shots behind, with compatriot Luke Donald (67) tied-third.

Snedeker was recently named as a USA wildcard pick for the Ryder Cup which starts on Friday at Medinah, Illinois.

The American, who led this year's Open at the halfway mark before eventually taking a share of third place, was one of five players - along with Northern Ireland's Rory McIlroy and US trio Tiger Woods, Nick Watney and Phil Mickelson - who knew that victory in Atlanta could be enough to also win the FedEx Cup.

Snedeker's dreams were only briefly threatened during the final round, when he found the lake at the sixth hole, resulting in a double bogey.

But superb putts from 40 feet and 18 feet respectively at the eighth and 13th enhanced his reputation as one of the Tour's finest on the greens - he missed only one putt from inside eight feet all week.

And victory was all but sealed when he chipped in from just off the 17th green for birdie.

He said: "I had complete confidence in what I was doing. I don't know where it came from, but I hope to rekindle it in the future."

Rose managed to hole a fine putt of his own, from 14 feet, on the final green to wrap up second place.

He said: "I think it's set up for a great Ryder Cup week [at Medinah, near Chicago]. Two great teams - all in the top 35 in the world - probably as strong as it's ever been between two teams.

"I didn't get the momentum going on the greens. I felt like I got a little tentative unfortunately.

"But I'm quite early down the track of what I've been working on with my putting."

After 11 successive rounds in the 60s, McIlroy - who won the Tour's two previous play-off events and took a decent lead into the PGA Tour Championship - closed with a 74 for a share of 10th place on one under.

He still won a $3m bonus for finishing the season in second place however, with Woods picking up $2m for third.

Had Rose beaten Snedeker in Atlanta, though, it would have given his Ryder Cup team-mate McIlroy overall victory in the FedEx Cup.

"I just said to Justin I wish he had done me a favour," the Northern Irishman joked.

"I have to stay positive. It's been a great year and I've had three wins, starting at the PGA Championship.

"I knew if I won this week I won the whole thing, but Brandt knew the same thing and he did what he needed to do. He played fantastic out there."

Former world number one Donald fired a second successive 67 to secure a share of third place in the Atlanta tournament with American Ryan Moore.

The Englishman said: "I've just been really close and it's nice to finally string a couple of good rounds together. I came up a little bit short for this week, but it was a good effort.

"I'm looking forward to this week. One, it's the Ryder Cup and some of my best moments in golf have been during that event, and obviously being in Chicago, the place I've lived the last 15 years."

But fellow Englishman Lee Westwood had a tournament to forget - his 74 left him bottom of the 30-man field on 15 over.