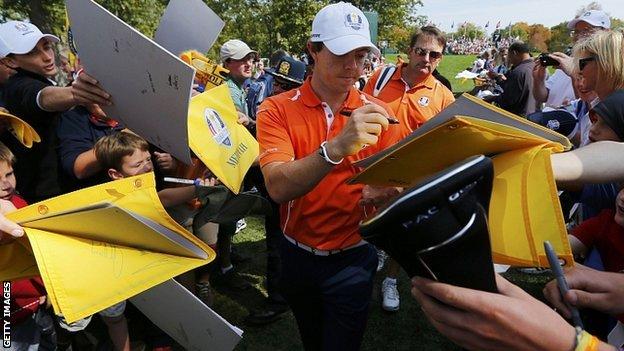 McIlroy goes into this week's event at Medinah as the world number one and a "marked man" in the eyes of Woods.

You're always going to want to try and take out their best player - that's just part of the deal.

The Northern Irishman, 23, has won three times in his last five events - including a second major at the US PGA.

"I would say that he is, at this moment, very close to how good Tiger was in that time between 1999 and 2002," said European skipper Olazabal.

"He's full of confidence. He's got the whole game and in that regard it's great to have players like that on your team."

Woods won seven of his 14 majors in a dominant spell between August 1999 and June 2002, becoming the first player to hold all four majors in a row when he lifted the 2000 US Open, Open and US PGA and 2001 Masters - a feat dubbed the "Tiger Slam".

McIlroy added the US PGA title to his 2011 US Open triumph and followed it with back-to-back victories in the end-of-season FedEx Cup play-offs in the US.

"Obviously we have the world number one, he's playing great," Olazabal said. "Even though he didn't win the FedEx Cup, the way he's played the last few months, he's been outstanding."

McIlroy, who has been labelled a "target" by American Ryder Cup player Jim Furyk and 2008 winning captain Paul Azinger, last week laughed off suggestions from former world number one Greg Norman that he now "intimidated" Woods.

The pair avoided each other at Celtic Manor two years ago, where McIlroy won two points out of four on his Ryder Cup debut.

Woods, who is back up to world number two, has already said McIlroy will be the key scalp at Medinah this week.

"You're always going to want to try and take out their best player, and that's just part of the deal.

"That's a fun challenge. I certainly have relished it over the years and I'm sure he's going to relish it this week."