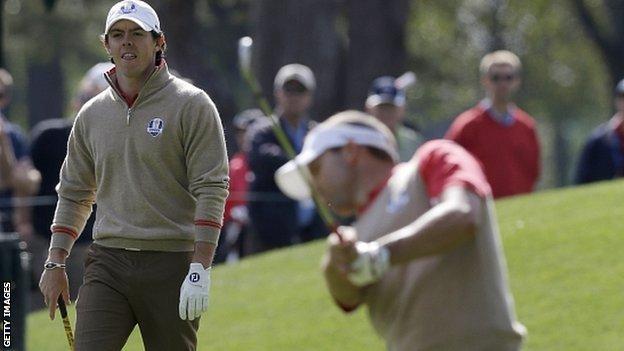 Captain Jose Maria Olazabal mixed up his groups for Europe's final nine-hole practice session on the eve of the Ryder Cup in Chicago.

The captains will name their foursomes pairs at the Opening Ceremony.

Europe are likely to kick off their defence of the Ryder Cup with the proven pairs of McIlroy and McDowell, and Donald and Garcia, who have won all four of their games together in the alternate-shot format.

Close friends Rose and Poulter played together in 2008, winning two of their three games, and practised together the first two days at Medinah.

Westwood, playing in his eighth Ryder Cup, is unbeaten in his last 10 foursomes going back to 1999 and could partner Scot Paul Lawrie, who returns to the cup for the first time since he made his debut in 1999.

That would leave Hanson, Kaymer and Molinari, who are all playing in their second Ryder Cups and first on US soil, and rookie Nicolas Colsaerts to soak up the atmosphere ahead of Friday afternoon's fourballs.

The Europeans will play just the back nine at Medinah's No.3 course on Thursday, after covering the full 18 on Tuesday and the front nine again on Wednesday.