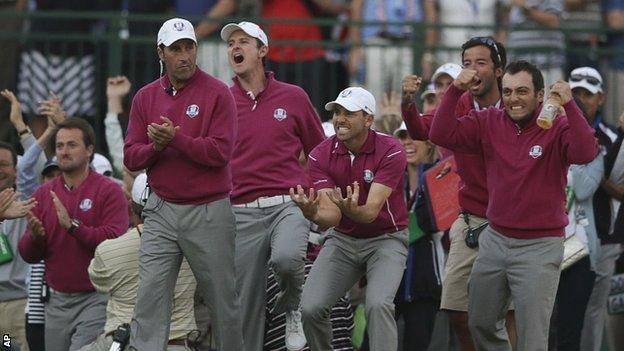 It might take the Miracle of Medinah. But after being dogged for three-and-a-half sessions by the Curse of Chicago, Europe at last have slim hope.

After another pre-lunch pummelling, their grip on the Ryder Cup looked not just to be slipping but broken. Thanks to the indomitable, totemic Ian Poulter, they will go into Sunday's singles with a couple of fingers still hooked around the handles of the old gold pot.

With the scoreboard 10-6 in the USA's favour ahead of the 24-man finale, Jose Maria Olazabal's men require eight points from those 12 matches. Both for reasons of precedent and current form it is a daunting ask.

Only once have Europe ever scored that many on a final day, back in noble defeat in 1979. Only once has a 10-6 margin been overturned, and that by the US team on home soil at Brookline 13 years ago.

For this miracle to be worked, two things must change: Europe must find the putting mojo that has been the USA's sole possession for the first two days, and they must get off to the mother of all fliers.

Throughout Saturday morning's foursomes and for most of the afternoon's fourballs, the greens appeared to be a code for which only the home side had the cipher.

It wasn't just that they were fast; it was the lines and the undulations, the dips and the secret sliding slopes.

Double-cut and ironed to the texture of wet bathroom tiles, they foxed the European pairings so often that there was a horrible fatalism about the whole thing - a lack of European energy, a contrasting dynamism and delight about their opponents that fired up the enormous crowds.

With minimal rough and the Medinah oaks so well spaced that even wayward drives inevitably offered an approach to the pin, it played to the strengths of Davis Love III's team - just as he had intended, and just as he is allowed.

"A European victory can still happen but they have to get away to a good start. There is no point Olazabal keeping who he deems to be his best players to the end. Europe have to get points on the board so there is no point putting them out last when all could be lost."

It meant Love's 12 good men were away and in front before Olazabal's knew what was happening. Only if the reverse happens on Sunday can belief take hold rather than merely flicker.

Out on the course in the first match of the day, further inspiration was on offer if his players looked up - the words "Do it for Seve, Europe" written across the pale-blue early morning skies by a high-flying aeroplane hired by a canny bookmaker.

Down below, Poulter was doing everything he could to lead from the front. Back in harness with Justin Rose, up against the US talisman of Bubba Watson and his foursomes partner Webb Simpson, sucking on an asthma inhaler while his caddy Terry Mundy smoked a fag, he sunk a birdie putt on the first and charged into the contest with a Ballesteros-like energy.

It all came back at him from the boozy, boisterous home support - shouts of "Get in the water!" from the galleries, "You suck, Poulter!" from a man in a white Masters caddy outfit, the puzzling "YOU CAN ONLY DO THIS IN AMERICA!" from a red-faced chap in Stars and Stripes trousers.

The dawn drinks were flowing - Bloody Marys in plastic cups, cans of lager, surreptitious hip-flasks. So too was the love for Bubba, a cartoon character of a golfer with a supersonic drive and a wide-eyed charisma that has made him Medinah's darling.

Chased down the fairways by the roars for Mickelson and Bradley on the hole behind, Watson and Simpson stormed back into a lead.

Bubba was the inspiration, Simpson - the fingers of his white glove flopping out of his back pocket like a cockscomb - the sickly passenger.

Poulter neither crumbled nor capitulated. Rose produced with the irons and wedges, his partner the putter, delivering on the ninth and 10th greens to turn one small slice of an otherwise all-red scoreboard blue.

It helped that one of their opponents was putting more like Wallace than Webb Simpson. But on a morning of otherwise total American domination, Poulter was a rare figure of European resistance, an object lesson for his team-mates in how they must fight the wildfires on Sunday afternoon.

"Poulter and McIlory's point was absolutely crucial. More than four points behind and it's virtually impossible to win the singles. You have to come fast out of the blocks. You've got to put points on the board. If you slip behind early it's very tough. The Americans are in absolutely prime position."

It is hard to understate the pressure on the away team's players here. Around each green are thousands of whooping, baying fans; between each green and next tee the players must walk through a narrow tunnel of faces and fists, bombarded by shouts of encouragement for their rivals - "You got this Bubba!" "Knock it tight, baby!" "OH BABY! OH BABY!"

It is unrelenting. With Poulter and Rose trying to protect a narrow lead down the stretch, they looked up to see Michael Jordan striding in to join the US entourage. Across a few fairways, Presidents George and George W Bush were about to do the same.

Narrowly, the two Britons hung on at the death, Simpson's seven-foot putt to tie the match on the 18th green sliding past.

But luck had little to do with it. Poulter is now 4-1-0 in Ryder Cup foursomes. With his five-birdie charge over the last five holes of his late afternoon fourballs with McIlroy, he confirmed it again: something of the spirit of Seve is raging through his veins.

When the call comes, when the pressure mounts, he can step up. Now the rest of his team-mates need to do the same.