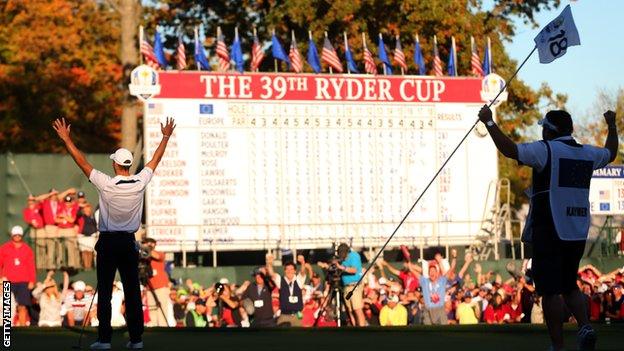 Europe produced a stunning final-day comeback to win the Ryder Cup at a shell-shocked Medinah.

The United States required only four-and-a-half points from the 12 on offer, but the Europeans secured eight and a half to clinch a historic 14½-13½ win.

Martin Kaymer sank a five-foot putt on the 18th green to get his team to the 14 points needed to retain the trophy.

Then a Tiger Woods bogey on the final green of the final match gifted Jose Maria Olazabal's side overall victory.

The victorious European captain said: "To the 12 men of Europe, what you did out there was outstanding. All men die but not all men live and you made me feel alive again this week.

"I don't know how heaven feels, but it must be close to this."

The win matches the record recovery of Ben Crenshaw's US team in Boston in 1999 and is the best from a European side in the Ryder Cup.

It was a fitting tribute to the late Seve Ballesteros, the man who did so much to reinvigorate the competition and whose trademark navy blue and white the side wore on the final day in Chicago.

"Seve will always be present with this team," said fellow Spaniard Olazabal.

"He was a big factor for this event, for the European side. Last night, when we were having a meeting, I think the boys understood that believing was the most important thing. And I think they did."

Kaymer held his nerve in the penultimate singles match to beat Steve Stricker, having been given some simple guidance from Olazabal.

He said: "Jose Maria told me: 'We need your point. I don't care how you do it, just deliver.' But I like those, it was straightforward. That is the way we Germans are. Fortunately, I could handle it and I made the last putt."

The German's putt was the high point of an afternoon of scarcely believable drama where Europe first clawed back their overnight deficit of four points and then matched their opponents point for nerve-shredding point.

How Europeans fared at Medinah

Blows were traded down the stretch, one side grabbing the initiative before the other snatched it back, until it came down to the last two matches on the final two holes.

Both were all-square, with overall score locked at 13-13.

When Steve Stricker three-putted on the 17th, Kaymer had a one-hole lead. The German then made a brilliant approach from a bunker on 18, rolling home the pivotal putt as Stricker crumbled under the pressure.

It was left to Italian Molinari to seal overall victory, when he halved his match with Woods.

"When I knew I was coming out last, I was really happy because I knew the guys would do a great job and it would come down to the last matches," he said.

"Martin did a great job and I just fought as hard as I could to get that last point."

For the first time in three days, Europe had come charging out of the traps, Luke Donald going into an early two-hole lead over Bubba Watson and muting both his opponent and the crowd in the process.

With Justin Rose also two up on Phil Mickelson, Rory McIlroy holding off the previously unbeatable Keegan Bradley and the unheralded Paul Lawrie taking early control against Brandt Snedeker, there was an entirely different atmosphere around the course than there had been on the first two one-sided days.

Donald had been asked to do what Colin Montgomerie had done in 2004 and win the first point of the day in style. And he did so on the 17th despite a late charge from Watson.

"At the death, it ended only one way - with Olazabal's men standing tall while American captain Davis Love's much-vaunted home-boys crumbled and broke."

Read the rest of Tom's verdict

McIlroy's day had begun in extraordinary fashion, confusion over his tee time meaning he was still at the team hotel with just 25 minutes to go. Thanks to a police escort, he eventually reached the course 10 minutes before he was due to tee off.

His battle with Bradley was a see-saw classic, but he got his nose in front on the 14th and went two up on the 15th before closing out with a long putt on 17.

Poulter has been brilliant all week and made it four wins out of four in typically indomitable fashion against Webb Simpson.

Poulter had gone two holes down early and only went in front for the first time on par-three 17th when Simpson finally cracked under the enormous pressure and stuffed his tee-shot into the bunker left.

Simpson then pulled his iron approach to the 18th while Poulter fired his from out in the oak trees to 13 feet. When the American's desperate long putt sailed way past, Europe had their third point in three.

A week after winning £6m at the Fed-Ex Cup, Snedeker was clobbered 5&3 by Lawrie, but Rose's triumph over the previously unbeaten Mickelson was more remarkable.

One down on 16, he nailed a nerveless putt to half the hole and then produced a wonderful 30-footer on the sliding 17th to go all square.

Mickelson, magnanimous, grinned his approval, but then slashed his approach to 18th over the back and watched aghast as Rose clipped his to 15 feet and then curved in a stunning birdie for the match.

The points kept coming for Europe. Jim Furyk collapsed from the same position against Sergio Garcia by pushing two six-foot putts right. Then, after Zach Johnson held off a tired Graeme McDowell, Lee Westwood found his form to beat Matt Kuchar 3&2 and put Europe 13-12 up.

It was peerless sporting theatre, the sun-drenched autumnal course awash with excitement.

When Jason Dufner held his nerve to see out Peter Hanson two up on the 18th, the score was level again at 13-13 with just two matches, both all-square, left on the course.

None of the four players still in action - Kaymer, Stricker, Francesco Molinari and Woods - had won a single point between them all week.

"Europe have not only retained the Ryder Cup, they've won! They've won! One of the epic days in Ryder Cup history. Somehow Europe have found a way. That is the comeback to end all come-backs, and in hostile territory. Somewhere Seve Ballesteros, the patron saint of lost causes, is smiling down. His apprentice Ollie has done it. Kaymer's nerve held."

Stricker broke first, making a dreadful mess of his putts on 17 and then booming his approach to 18 long, while Kaymer conjured up a beauty from the fairway bunker.

With Woods going one up on Molinari on 17, Kaymer had two putts for the Cup. And he somehow held his nerve as the shadows lengthened to seal an extraordinary triumph.

With the packed home galleries silent with disbelief, a dazed Woods then blew two putts from within eight feet to hand Molinari a half point and with it overall victory to the Europeans.

"The boys understood that believing was the most important thing and they did," said Olazabal.

US captain David Love admitted defeat was hard to take and compared it to the loss Europe suffered at Brookline in 1999. "We know what it feels like now," he said. "It's a little bit shocking. We were playing so well."

Simpson lost to Poulter 2 up

Mickelson lost to Rose 1 up

Furyk lost to Garcia 1 up

Stricker lost to Kaymer 1 up