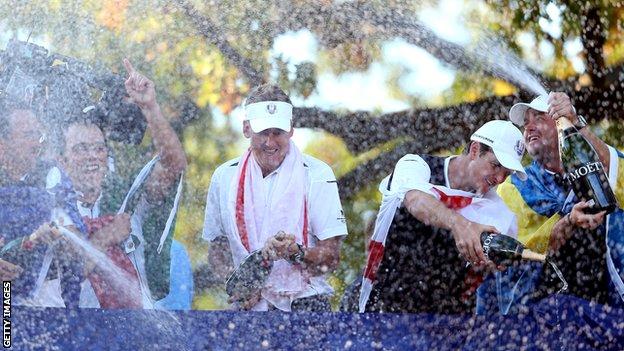 Europe's amazing Ryder Cup will go down as one of the greatest sporting occasions.

With the United States requiring only four-and-a-half points from the 12 on offer, the Europeans fought back brilliantly, securing eight and a half to clinch a historic 14½-13½ win.

But just what did it feel like to be part of the action? Here, the players and the team captain's described their emotions.

Jose Maria Olazabal, 46, Europe Captain: "To the 12 men of Europe, what you did out there was outstanding. All men die but not all men live and you made me feel alive again this week. I don't know how heaven feels, but it must be close to this."

Luke Donald, 34, World ranking 3, England: "It has been a great week. It is always tough to play away from home in a Ryder Cup but I felt somewhat loved here, even though I was playing for the Euros." Won 2 Lost 2 Tied 0. Points won 2.

Sergio Garcia, 32, World ranking 19, Spain: "I have no doubt in my mind that he (Seve Ballesteros) was with me today all day, because there's no chance I would have won my match if he wasn't there. It feels so good to win it for him and for our captain Jose." Won 2 Lost 2 Tied 0. Points won 2.

Martin Kaymer, 27, World ranking 32, Germany: "That is something that I will remember probably for the rest of my life and hopefully I can talk about when I have some grandchildren one day." Won 1 Lost 1 Tied 0. Points won 1.

Paul Lawrie, 43, World ranking 28, Scotland: "Brookline was obviously the opposite. We went ahead and should have won but they played fantastic golf, coming back in the singles. But to be 10-6 down on American soil and win it, never mind tie, that is what dreams are made." Won 1 Lost 2 Tied 0. Points won 1.

Graeme McDowell, 33, World ranking 18, Northern Ireland: "I can't believe that I really can't. The first two days of this event, we just got beat up by the Americans. All the putts that dropped were pretty much American putts. We knew something had to come, something good had to happen to us." Won 1 Lost 3 Tied 0. Points won 1.

Rory McIlroy, 23, World ranking 1, Northern Ireland: "It feels unbelievable. We knew it was possible because the Americans did it to us in 1999 at Brookline. We just needed to get off to a good start and get blue on the board early. The first five guys did that. The momentum we got from Saturday evening carried us into the day." Won 3 Lost 2 Tied 0. Points won 3.

Francesco Molinari, 30, World ranking 31, Italy: "It is just amazing. Everyone today on the team did a fantastic job. It maybe didn't look like it but we have been trying hard all week and we never gave up. This thing we have on our sleeves today (the image of Seve) really made a difference. We had him with us all day and we didn't want to lose." Won 0 Lost 2 Tied 1. Points won 0.5.

Ian Poulter, 36, World ranking 26, England: "There was a buzz in the team room that didn't feel like we had a four-point deficit. For some reason, everyone was calm. Everyone was cracking jokes. We just felt we had that tiny little chance and the boys have proved it and made history. It has been unbelievable. I'm officially taking two years off and I'll see you at the next one." Ryder Cup performance: Won 4 Lost 0 Tied 0. Points won 4.

Justin Rose, 32, World ranking 5, England: "We're in shock. We wanted to believe, we really did want to believe but we were not under any illusions of how hard that day was going to be. You are four shots back against a team that has played well all week on a golf course that is made for them." Won 3 Lost 2 Tied 0. Points won 3.

No reaction yet from:

Davis Love III, 48, USA Captain: "It was certainly a difficult loss. I think any Ryder Cup loss is difficult. Today was certainly not what we expected. We had a lot of guys today that played well and just got beat. They got beat by some holed putts, some chip ins, some incredible shots, and some matches got flipped at the end on long putts and great saves by the other team. I have to congratulate them on the way they played."

Jason Dufner, 35, World ranking 9, on Twitter: "Today was tough, proud of the guys on our team and our captains. Wish the result would have been different. Thanks for all the support." Won 3 Lost 1 Tied 0. Points won 3.

Jim Furyk, 42, World ranking 23: "How is this compared to '99? Well, that was fun. This was pretty miserable. It was very similar circumstances with the four points. Very similar score today, if not identical score. You know, it was a hell of a lot of fun being on the other end. It wasn't very much fun today." Won 1 Lost 2 Tied 0. Points won 1.

Dustin Johnson, 28, World ranking 13, on Twitter: "Wow. Stunned but really proud of how we played against a very good Euro team! Congrats to the Euros, but now we'll be even hungrier!" Won 3 Lost 0 Tied 0. Points won 3.

Phil Mickelson, 42, World ranking 16: "On 18, when it looked like I might be able to stop some of momentum on the board, they were able to get another point, and I thought that match, as early as it was, was a pivotal one." Won 3 Lost 1 Tied 0. Points won 3.

Steve Stricker, 45, World ranking 12: "When I went past the board at the number 10 tee, I saw a lot of blue up on the board and started doing the maths. I kind of figured that it was going to come down to Tiger or I in the last two groups. I didn't get it done." Won 0 Lost 4 Tied 0. Points won 0.

Tiger Woods, 36, World ranking 2: "It was already over [when I conceded the last hole]. We came here as a team and the cup had already been retained by Europe. You come here as a team and you win or lose as a team. It's pointless to even finish. So 18 was just, 'Hey, get this over with'." Won 0 Lost 3 Tied 1. Points won 0.5.

No reaction yet from: