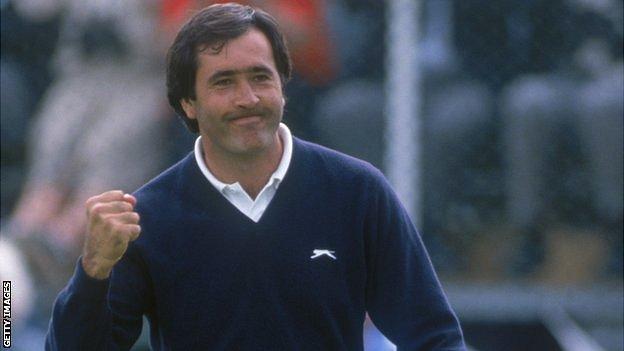 The fighting spirit of Seve Ballesteros was evident as Europe produced a stunning comeback to win the Ryder Cup on Sunday, says the nephew of the legendary golfer, who died in 2011.

"What we saw was the attitude Seve had not only on the golf course but also in his life, especially with his illness," said Ivan Ballesteros.

"He was a fighter and always positive."

Ivan added: "He used to say 'thinking does not cost much so if you have the chance to think, think positive.' That was what we saw."

The Europeans wore navy blue jumpers and white shirts, the colours most associated with Ballesteros, on Sunday in tribute to the five-time major winner, who died in May last year after a long battle with a brain tumour.

"It was very nice to see them remembering Seve, he was present all weekend, he was somehow there, his spirit was there," added Ivan, who is vice president of the Seve Ballesteros Foundation.

"It was a great gesture from captain Jose Maria Olazabal and all the European team to remember Seve so much especially on Sunday and the way they played, their attitude, was a great example for the world of golf."

Europe won a record eight-and-a-half points out of the 12 available in Sunday's singles matches.

Ian Poulter beat Webb Simpson 2up to complete four wins out of four at Medinah, while Justin Rose came from one down on the 16th to birdie the last two holes and beat Phil Mickelson on the 18th.

Martin Kaymer then kept his nerve to hole from six feet and secure the decisive 14th point that guaranteed Europe would not lose the Ryder Cup.

"The way they played, they performed fantastically well. Lots of people would say it was impossible to win, it was a fantastic performance from the European side," said Ivan.

"Not many people would believe it was achievable to come back and they did very, very well. I very much doubt a Hollywood script would do better than what we saw on Sunday and over the weekend."