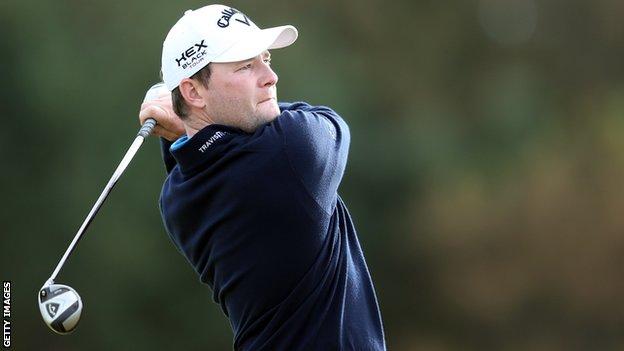 South Africa's Branden Grace shot a European Tour record-equalling 60 to lead the Dunhill Links Championship at the end of the first day.

Grace's round, which took place at Kingsbarns - one of three courses being used for the tournament - was the 14th time that the score has been recorded.

The 24-year-old finished the round with five consecutive birdies.

"I never really made anything long," said Grace. "It was all 12 to 15-footers and it's nice just to have a bogey-free round on a links.

"We were lucky with the weather, but you still have to get it in the right spots and get it around."

Kaymer's round of 70 was the best performance from the trio, with the German missing a par putt at the final hole that was of a similar length to the one that gave Europe victory on Sunday.

"The putter was not really hot but in general you've got to play solid at the toughest course we play here," said Kaymer.

"It's a very nice feeling to come here after Sunday. A lot of people told me it was their best sporting experience on TV."

After playing each of the three courses, only the top 60 and ties will play the final round at St Andrews.