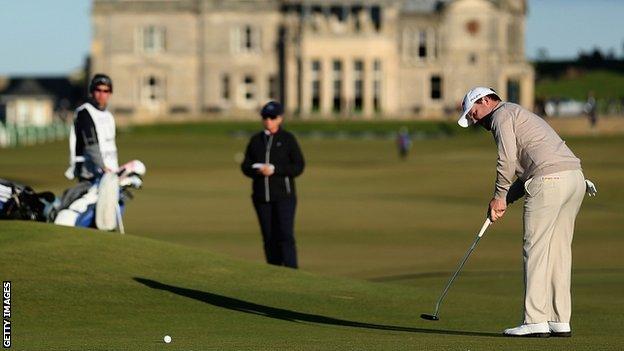 South Africa's Branden Grace pushed his lead out to five shots after two rounds of the Dunhill Links event in Scotland.

Grace, 24, who has won three Tour titles this year, followed his Tour record-equalling 60 at Kingsbarns with a 65 at St Andrews to lead at 17 under.

Swede Joel Sjoholm and Denmark's Thorborn Olesen were tied at 12 under after rounds of 67 and 69 at St Andrews and Carnoustie respectively.

The top 60 and ties will go on to play Sunday's final round at St Andrews.

Grace had a putt for an eagle on the 357-yard last to match the circuit's lowest-ever 36-hole total in relation to par, but his birdie took him alongside the mark set by compatriot Ernie Els at the 2004 Heineken Classic in Australia.

"I think it helped I was playing a different course," said Grace, who was outside the world's top 300 less than a year ago and came through the Tour qualifying school. "If I had played Kingsbarns again after shooting the lights out yesterday I might have pushed it too much."

Grace, who also won the Vodacom Origins of Golf event on the Sunshine Tour last week, added: "A win is a win.

"It gives you confidence and puts a fire in you. I'm still just running with it."

Germany's Martin Kaymer, the man who sank the winning putt in the Ryder Cup, was doing best of the European side in action but was down in 56th place on three under - 14 strokes adrift.

His Ryder Cup team-mate Peter Hanson of Sweden was one further back, while Paul Lawrie was joint 129th on one over.

Open champion Ernie Els ended one under and faced a battle to make Saturday night's cut, while twice winner Padraig Harrington was level and 2011 Open winner Darren Clarke was alongside Lawrie.

Paul Casey was another on three under, but the former world number three will remember the day for two unusual incidents - a dog running off with his ball and swimming star Michael Phelps, his partner in the pro-am event, holing a 50-yard putt.

Casey was on the green in two at Kingsbarns' long 12th when the dog snatched the ball.

"It is the weirdest thing I have ever had happen on a golf course," said the world number 118, who shot 69.

"I had that moment of panic where I thought I'd have to play it where Digby - he had his name on his collar - left it, but we placed it back as close as we could to where we thought it originally was."