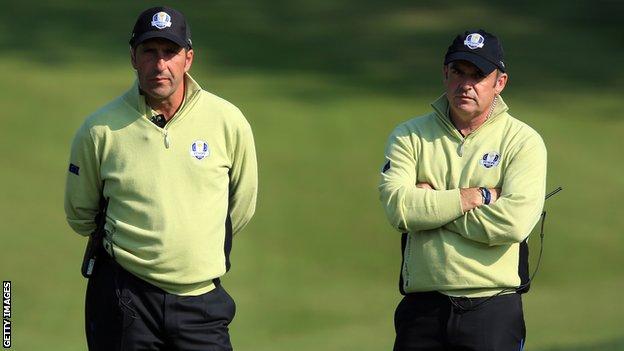 Paul McGinley would relish the chance to lead Europe at the 2014 Ryder Cup but will not actively chase the role.

"It's a big honour to be Ryder Cup captain but it's not something I want to commit myself to or say too much about," he told BBC Scotland.

"It's best if I just step away now and let things evolve.

"My caddie is a wily old Scot and he has a great saying: 'whatever's for you, won't pass you by', so I'll just stand back and wait until January."

The quality of golf in Europe is just as good as in America. We've proved that. We've won six of the last eight Ryder Cups

It was the 45-year-old's second stint in that capacity and the Dubliner is the bookmakers' favourite for the top job when the tournament comes to Gleneagles in two years.

Clarke and Bjorn were also vice captains in 2010.

Olazabal has already ruled himself out of the running after steering the visitors to a 14.5 - 13.5 win, clawing back a four-point deficit during a thrilling final-day singles session.

The choice of skipper is expected to be announced at the start of next year.

And McGinley said: "One way or the other, I'll deal with it and move on.

"There not much I can say. I've done my bit in terms of serving as a vice captain twice and captaining in two Seve Trophies.

"At this stage, it's just waiting to see."

Reflecting on the success in Medinah, McGinley said: "There is a real feeling of pride and satisfaction.

"It was very much a low to a high because we got battered on the first two days.

"But the full circle turned and the 18th on Sunday was just a great place to be.

"The quality of golf in Europe is just as good as in America. We've proved that. We've won six of the last eight Ryder Cups.

"Economically, our tour is not as strong as the American tour, which is a wonderful tour. Nine of our players are full-time over there.

"They have a big advantage over us in terms of TV deals."

You can hear Paul McGinley on BBC Radio Scotland's final Golf Show of the season on Sunday at 10:30 BST