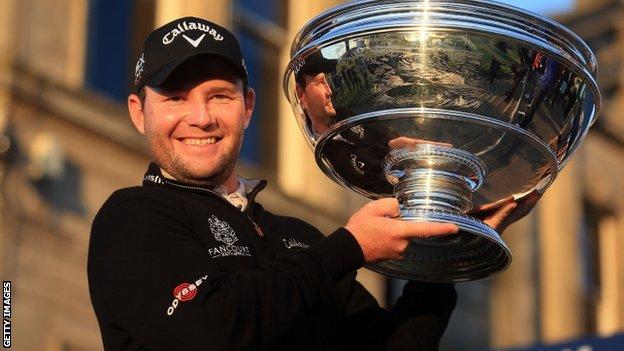 Grace, 24, led from the first round to capture his fifth title of the year.

Branden Grace earned his place on the European Tour after coming through qualifying school at the fifth time of asking last December. Since then he was won four tournaments and climbed in to the world's top 40 from outside the top 300.

"I've really dreamt of this moment my whole life. It was a tough day, but the putter started working," said Grace.

Olesen closed in on Grace's overnight four-shot advantage and levelled on the 11th but could not prevent the Pretoria golfer securing back-to-back wins.

Grace birdied holes 12, 13 and 14 to pull clear once again and when Olesen bogeyed the 15th the South African's lead was back up to four.

A birdie on the 16th from the Dane kept the tournament alive, but Olesen missed an eagle attempt on the final hole and Grace duly claimed the £491,000 prize.

Grace has risen from outside the world's top 300 to inside the top 40 and has a chance of overtaking world number one Rory McIlroy for the European money list title next month.

"It's definitely in my sights," said Grace, up from 12th to third on the European list having won the Joburg Open, Volvo Champions, China Open and last Sunday's Origins of Golf title.

Scotland's Stephen Gallacher finished in a seven-way tie for fifth after shooting a quadruple-bogy eight at the 16th.