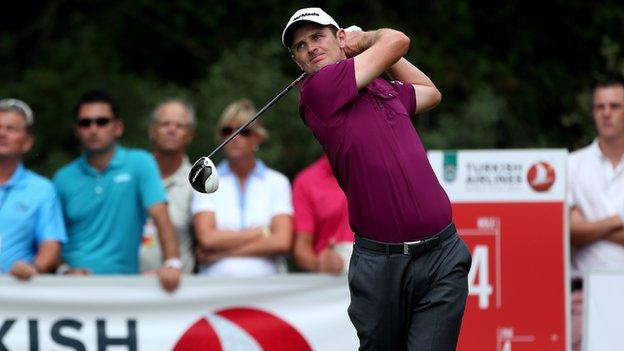 Justin Rose put in a late charge to beat Tiger Woods and set up an all-English decider against Lee Westwood in the inaugural World Golf Final.

Rose shot a 69, including two birdies and an eagle in the last six holes, to beat the 14-time major winner and world number two by one shot in Turkey.

Earlier Woods had knocked out world number one Rory McIlroy.

Westwood reached the final after a six-stroke win over 2011 US Masters champion Charl Schwartzel.

The Englishman shot two eagles and eight birdies in a course record 61.

He will go head to head with Rose on Friday for the first prize of $1.5m.

Rose trailed Woods, who beat McIlroy by six strokes in their final Group One encounter, until he holed a 110-yard sand wedge for an eagle two at the 14th.

"When Justin birdied 13 and holed out at 14 it was the turning point in the match," Woods said afterwards. "I was two up at the time and all of a sudden one down with four to play."

Rose, who carded a 62 to defeat US Open champion Webb Simpson in his last group game, agreed with Woods.

"That shot at 14 was easily the turning point," he said. "In proper matchplay you would only win the hole but in this format I've picked up two shots on Tiger and it's helped me win the match.

"It's now an all-English final with Lee. I would dearly love to win as I want to stay fresh and hungry for the rest of the season.

Westwood said of his round "it was just one of those days when I was on a roll".

He added: "It seemed the hole just got bigger and bigger with each hole I played and that hasn't happened for a while."