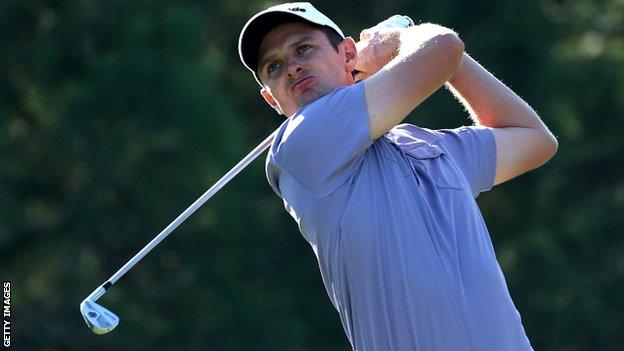 Rose, who beat Tiger Woods in the semi-final, led from the first hole against Westwood after a 25-foot birdie.

The lead was two shots for much of the back nine but Rose missed a short putt at the 16th and the gap was cut to one.

Rose holed again from 25 feet to birdie the 17th, and though fellow Englishman Westwood birdied the last for a 67, Rose parred safely to finish with a 66.

Neither played dropped a shot in a high-quality final and Westwood birdied both of the par fives on the outward nine to match Rose at two under.

But his opponent rolled in a birdie putt from eight feet at the par-three eighth and picked up another shot from a similar distance at the 10th to open a useful advantage.

Having holed a succession of putts during his magnificent course record of 61 in Thursday's semi-final victory over Charl Schwartzel, Westwood was unable to find the same inspiration on the greens.

Opting for crisp white shorts in the Antalya autumn sunshine, Westwood played a sublime approach from the light rough to three-and-a-half feet at the 13th but his downhill birdie putt missed the hole completely on the left and the gap remained at two.

After Rose, 32, missed the fairway at the next, Westwood sent another fine approach into the heart of the green but saw another birdie opportunity, this time from around seven feet, stay above ground, as his opponent calmly salvaged par.

The devilish par-five 16th saw Westwood narrowly evade the water with both his tee shot and five-wood second but the 39-year-old made his birdie and surprisingly gained ground when Rose missed from inside three feet.

Rose was twice as far away on a similar line but he sank his putt first and in classic match play fashion Westwood could not do the same.

He kept the pressure on until the very end, however, after another delightful approach to five feet created another birdie.

To win the title and a cheque for $1.5m, Rose was left with a putt of similar length to the one he missed on the 16th but there was to be no repeat of that mistake.

"To not get beaten at all through the group stages, it's a great feeling," he said.

The level of interest generated by this event proves there is an appetite for a season ending contest limited to the very top players in the world.

Although Rory McIlroy struggled for motivation, that malaise didn't seem to afflict most of the rest of the field.

Tiger Woods was typically competitive and the tournament was ultimately won by arguably the hottest player in the world at the moment.

The event will not return to Turkey next year - the Turkish Open will be played here instead - but already there are moves afoot to take the World Final elsewhere, possibly the Bahamas.

"I don't have a loose shot that's plaguing me all the time, I feel like my game is well rounded at the moment, all aspects can pull through for me at different times. Driving was a little bit off today but I made a few putts today so I feel like I've got something every day to lean on."

Westwood, who at 22-under was a shot better than Rose in aggregate terms over the week at Antalya, said: "We both played really well, the slight difference was on the greens, Justin holing a couple of 20-footers and the longest putt I made was about eight or nine feet on 16 so I left a lot of chances out there, but that's the way it goes sometimes.

"It's been a great week. Other than the financial rewards, it's been good to get back out on the golf course after the Ryder Cup and edge your way back to scoring. I know it's medal match play and you're focusing on what the other guy's doing but you've still got a card in your hand and you're trying to put together a score.

"I've only won twice this year so I'd like to win more before the year's out but I'm pleased with the way my game's going. I'm rolling the ball well, I hit a lot of good putts that didn't go in.

"The flags were cut more like on the first day where they were on slopes and were quite difficult to read, I found myself allowing too much for the grain so I think that's why I didn't hole so many putts today."