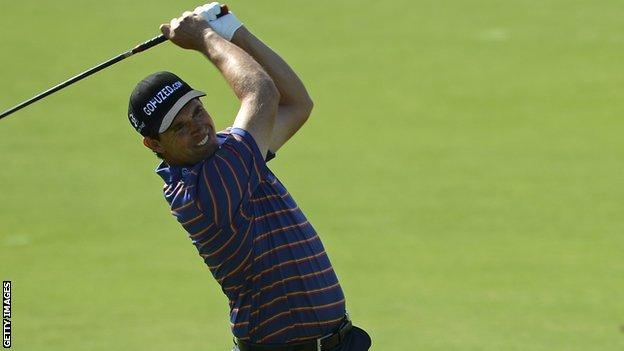 Padraig Harrington has been handed a place in the four-man PGA Grand Slam of Golf at Port Royal in Bermuda on Tuesday and Wednesday.

The Irishman replaces current Open champion Ernie Els who has been forced to pull out with a sprained ankle.

The PGA Grand Slam of Golf is supposed to bring together the four major winners of the year but US PGA champion McIlroy is instead defending the BMW Masters title in Shanghai.

The second and third alternatives, Graeme McDowell and Tiger Woods, are also competing in Asia.

"While my entry is under unique circumstances, I am excited to compete in the event again," said Harrington.

"I came close the last two times I was there, losing in play-offs to Angel Cabrera in 2007 and Jim Furyk in 2008, so maybe the third time will be a charm."

Els, who won the PGA Grand Slam in 1997 and 2010, was looking forward to competing in the event which was won by Bradley last year.

"I am bitterly disappointed," he said.

"It is a great reward for winning a major and something I have enjoyed in the past and was looking forward to again."