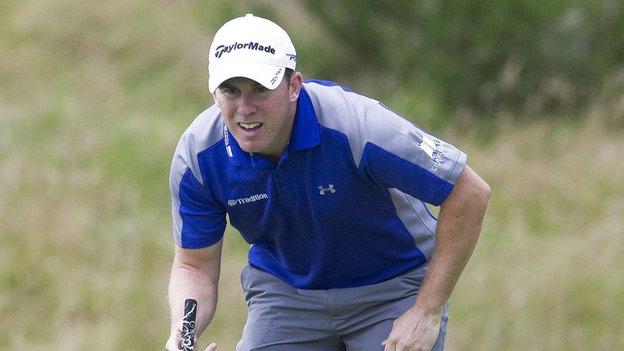 Richie Ramsay bogeyed the 18th hole and then lost a play-off as he blew his chances of the Indian Open title.

The Scot led by a shot after the 17th, but his three-putt bogey handed Thaworn Wiratchant of Thailand a second chance.

Aberdonian Ramsay then skewed his tee-shot in the play-off, finding the water and he could only make a double bogey as Thaworn took the title with a bogey.

The 29-year-old held a one shot lead over Jaakko Makitalo of Finland before the final day's play.

And he was surprised that he let the lead slip as he finished with a 68 while Wiratchant came from two strokes behind with a five-under-par round to clinch his third title on the Asian Tour.

"I stayed committed to every shot, but Thaworn played good," said Ramsay, who finished 14 under par at the event with £800,000-worth of prizemoney at the Karnataka Golf Association, Bengaluru.

"It was mine to win and a very strange thing happened on the last because I've been excellent under pressure the whole week."

Even after his final round, the Scotsman - who was only competing on a sponsor's invite - felt the tournament was his to win.

"I had a great third shot in the play-off which landed at the back of the green," he said.

"If there was a good lie, I would have fancied knocking that in.

"I could have got a very easy up-and-down, but it was lying in a bad pitch mark. Some days, things just don't go your way."

Meanwhile, fellow Scotsman Scott Jamieson finished in a tie for fifth at the Perth International in Australia.

But three of his fellow Scots looking to retain their European Tour cards had a less successful tournament.

Craig Lee tied for 28th after a final-day 71 left him 18 strokes behind winner Bo Van Pelt of the United States.

Alastair Forsyth finished a lowly 62nd on seven over par after a closing 76, while George Murray failed to make the halfway cut.

Jamieson's 68 left him eight strokes adrift of Van Pelt, but the Scot collected a cheque for £36,000.