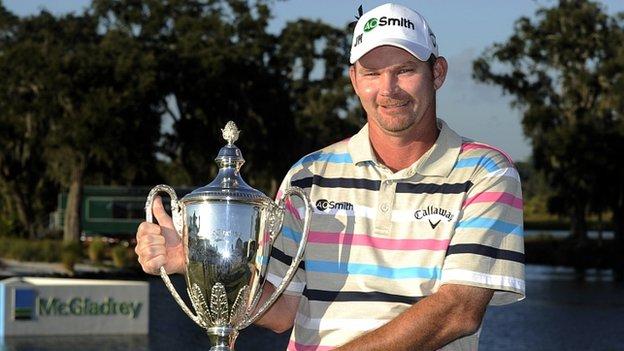 Tommy Gainey fired a 10-under-par round of 60 to clinch his maiden PGA Tour title by one shot from fellow American David Toms at the McGladrey Classic.

Gainey, 37, made up seven strokes on the leaders as he finished 16 under with eight birdies and an eagle on the par-five 15th at Sea Island, Georgia.

Jim Furyk, co-leader overnight with US Ryder Cup captain Davis Love, bogeyed the last to miss out on a play-off.

Furyk ended third at 14 under with Love two strokes further back.

A birdie at the last would have made Gainey the sixth player in PGA Tour history to record a 59. He hit his approach inside 20 feet but his birdie attempt came up short.

Gainey, who has an unconventional swing, had recorded just one top-10 in his previous 30 starts on the 2012 PGA Tour.

"It's been a hard year for me and finally, we got it right," said Gainey, who is known as "Two Gloves" for wearing a black golf glove on each hand.

"I get bashed all the time about my swing. The only thing that matters is right before impact on the downswing."

Veterans Toms, 45, and Furyk, 42, both made late runs with rounds of 63 and 69 respectively but neither could find the finishing birdie they needed to match Gainey, who finished several hours earlier.

Toms pushed his drive into a bunker, while Furyk also drifted right with his approach and ended up with a three-putt bogey.

"I was thinking about what kind of putt I was going to have before I ever hit the fairway," said Toms, the 2001 US PGA champion. "You get ahead of yourself and that's what happens."

Furyk has had a year of disappointments, beginning with a bogey on the 16th hole of the final round to end his US Open chances at Olympic Club in June.

He also double bogeyed the final hole at Firestone to lose the Bridgestone Invitational, and lost a 1-up lead against Sergio Garcia with two holes to play in the Ryder Cup.

"I think what I'm most disappointed about is when it came down the stretch, hitting the ball pretty much as good as I can, I made really, really poor swings at 17 and 18 with a seven iron and eight iron," Furyk said on Sunday. "So to play those two holes and not get one good look at it for birdie was disappointing."

Love, trying to become the first Ryder Cup captain to win on the PGA Tour since Tom Watson in 1996, faltered on the back nine with a three-putt bogey on the 14th, and a tee shot that found water on the 16th.

Gainey's score was the first 60 on the PGA Tour since Patrick Cantlay at the 2011 Travelers Championship, and it was the lowest closing round by a winner since Stuart Appleby shot 59 in The Greenbrier Classic in 2010.

It also adds to the remarkable number of comebacks this year. Kyle Stanley rallied from eight shots back to win in Phoenix, while Brandt Snedeker (at Torrey Pines) and John Huh (in Mexico) came from seven shots behind on the final day.