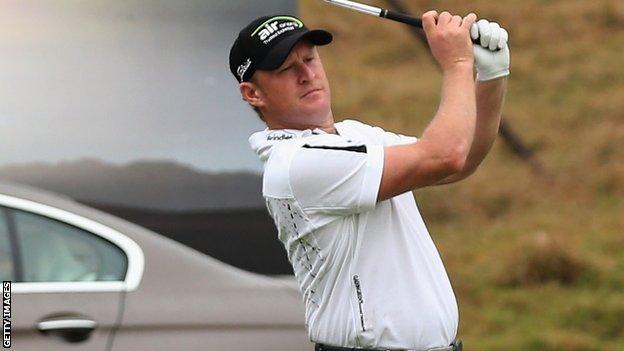 Welshman Jamie Donaldson struck a course-record 62 to lead the BMW Masters by four shots on 10 under par after the first round in Shanghai.

World number one Rory McIlroy is five shots back on five under, as is Europe Ryder Cup captain Jose Maria Olazabal.

England's Justin Rose, looking to overtake McIlroy in the Race to Dubai European money list, is a shot behind.

Italy's Francesco Molinari and Sweden's Peter Hanson are Donaldson's closest challengers, both on six under.

McIlroy, Rose, Molinari and Hanson are four of 11 members from Europe's victorious Ryder Cup team who are participating in China, along with skipper Olazabal, who is without a top-10 finish since January.

Rose and South African Branden Grace both have the opportunity to take the Race of Dubai lead from McIlroy, who is bidding to emulate Luke Donald's 2011 achievement of topping both the European and United States money lists in the same year.

But it was Donaldson, who won his first Tour title at the Irish Open in July, who stole a march on the field, carding birdies at 10 of the first 16 holes in benign conditions at Lake Malaren.

"It's up there with the best rounds I've ever shot," said the world number 51. "The golf course is no pushover by any stretch of the imagination."

The lack of wind made good scoring possible, according to Northern Ireland's McIlroy, who birdied the last to join Olazabal and compatriot Michael Hoey in a tie for fourth.

"Jamie has shot 10 under, which is phenomenal scoring, and I was just happy to stay somewhere within touching distance," said the two-time major winner.

"Ollie's name on the board was nice to see. A few weeks ago 12 individuals came together as part of the team and now we're back playing and trying to beat one another."

Rose, who needs a top-two finish to have a chance of overtaking McIlroy in the money list, lies alongside Germany's Martin Kaymer and South African Louis Oosthuizen on four under.

Northern Ireland's Graeme McDowell and Scot Paul Lawrie are a shot further back, with Grace and English trio Lee Westwood, Ian Poulter and Luke Donald all two under.