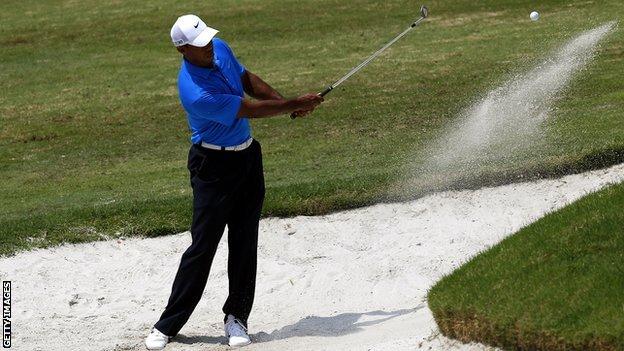 Tiger Woods birdied three of the last four holes to leap into contention at the Asia Pacific Classic in Malaysia.

The world number two is three shots behind fellow American Troy Matteson, who leads by one shot on eight under.

With only seven players going over par, Woods believes the soft conditions give a chance of a 59 being shot this week.

"If the wind doesn't blow and we get decent pins, where they don't put them on spots where they're tough to get at, guys could do it," he said.

"But it's all dependent on the pin locations and the fact that it's going to rain here just about every day. But if everything works out in your favour, who knows?"

Woods stuttered with back-to-back bogeys on the front nine, but came home in 31 for a five-under round of 66 in sweltering Kuala Lumpur.

"It was a little bit stifling out there," continued the 14-time major winner.

"Everyone has got to deal with it. It's hot, it's humid, and they've got to stay hydrated. I'm just like everyone else here, we're going to lose a few pounds this week."

United States trio Brian Harman, Jeff Overton and Robert Garrigus are tied for second, a shot behind Matteson, who carded a 63.

Defending champion Bo Van Pelt, winner of the Perth International on Sunday, could only shoot a one-under 70 and is down in joint 30th place.

Scotland's Martin Laird recovered from bogeying the first to card a three-under 68.