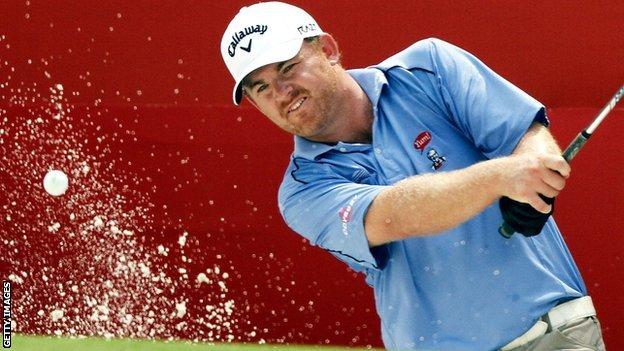 Robert Garrigus hit his second seven-under-par round of 64 at the Asia Pacific Classic in Malaysia to open a two-shot lead over the field.

The 34-year-old American is 14 under at the halfway stage, two shots ahead of South African Jbe Kruger.

"No disrespect to anybody on the PGA Tour - they're all great players - but I feel like I can beat anybody in the world," Garrigus said.

Tiger Woods is five shots back despite sinking six birdies in a four-under 67.

The world number two has holed 13 birdies in the tournament so far, but two bogeys in each round has left tied fifth on nine under.

"It is playing where it could be had out there," said the world number two, referring, for a second day, as to how easy the course is playing.

"Guys are shooting good scores - a bunch of 65s and lower. You just can't keep passive. You have to be aggressive."

Garrigus, the world number 43, has only one career victory to his name, but has been a runner-up three times on the PGA Tour this season.

After pars on the first six holes, Garrigus birdied six of the following seven and then made two more, before dropping his only shot of the day on the 447-yard 18th.

Kruger, who won his first European Tour title in India in February, also shot a 64 on day two and credited his excellent round with playing alongside Woods.

"I think it definitely made me concentrate a bit harder," the 26-year-old said. "That is one thing I've been lacking the last couple of months, so I think I want to play with him every day."

First-round leader Troy Matteson, of the United States, is still to drop a shot at the tournament, but only two birdies in a second-round 69 saw him fall to joint-third on 10 under par with Australian left-hander Greg Chalmers.

Alongside Woods are fellow American Kevin Na and Zimbabwe's Brendon de Jonge, while Scotland's Martin Laird is joint-11th on seven under after a 67 on day two.