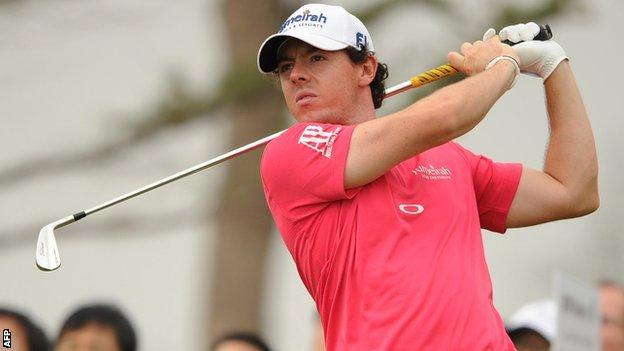 Rory McIlroy is one shot behind leader Peter Hanson going into the final day of the BMW Masters in Shanghai.

World number one McIlroy fired a three-under-par 69 to close the gap on Ryder Cup team-mate Hanson, who leads on 16 under par after a round of 70.

South African George Coetzee moved up to third with a 66, with English duo Luke Donald and Justin Rose among six players tied for fourth on 11 under.

Rory McIlroy is aiming to end the season at the top of the money lists on both the European and US PGA Tours.

He is currently top of both lists and is aiming to follow in the footsteps of Englishman Luke Donald, who achieved the same feat in 2011.

Hanson began the third day with a two-shot advantage over McIlroy and remained on course for his second European Tour victory of the season after a round which included five birdies and three bogeys.

He was caught first by McIlroy and then by Belgian Nicolas Colsaerts when he followed an early birdie with three bogeys by the eighth, but regained control with birdies at the ninth, 11th, 13th and 15th.

The Swede, who won the KLM Open in Holland last month, said he would have to raise his game to hold off McIlroy in the final round.

"I feel myself very lucky to be in this position and hopefully I can stay ahead of him because it is going to be a tough one considering the way he is playing," said Hanson.

"But I do need to step up a bit more because if I don't I am going to have the world number one snapping right at my heels and if I'm not careful he could be going past me.

"I have to bring my A-game to beat him - he looks very motivated, very focused."

McIlroy, chasing a fifth victory of the season on the course where he won a year ago, dropped his only shot of the day at the long third and had to wait until the 11th for his second birdie.

The 23-year-old made a 14-foot putt to narrow the gap to one again on the 16th and then lipped out from nine feet at the next. But he remains favourite for a first prize of over £720,000.

"Conditions were a bit trickier," said McIlroy. "They moved a few tees around and the wind was up a bit and from a different direction.

"You had to think about it a bit more, but I kept myself in the tournament and it's always nice to go out in the last group on the last day."

McDowell, the 2010 US Open champion, moved into a tie for 10th with a 66, although he bogeyed the last and is six shots behind Hanson.

Colsaerts looked to be in a strong position to challenge and at one stage was joint leader, but his round was ruined by successive double-bogeys on the 16th and 17th to fall back on 10 under.

Welshman Jamie Donaldson shot a course-record 62 to lead after the first day on Thursday but has fallen down the leaderboard after his 74 on Friday was followed by 72 on Saturday.