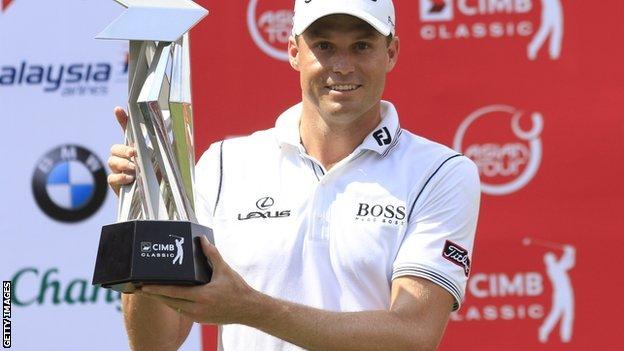 He came from four shots behind in Kuala Lumpur to end 22 under par and beat Van Pelt and Robert Garrigus by one shot.

Tiger Woods carded a 63 - his second lowest round of the season - to finish joint fourth.

A last-hole birdie would have given Watney a 59, but he bogeyed it the day after in the same position.

Watney, 31, had to wait to see if he would be caught, but Van Pelt failed to grab the birdie he needed to force a play-off and Watney claimed the £807,000 first prize.

Woods recorded six birdies in his first 10 holes but, by the time he picked up more shots at the 16th and 17th, Watney had moved clear.

"I'm very pleased with the way I played," Woods said. "I hit the ball well and hit a bunch of putts today too. So overall it was a good day.

"I had to shoot nine under today just to have any kind of a chance. Yesterday's nine holes put me in a spot where I couldn't win the championship."

Woods will play a one-round exhibition match with world number one Rory McIlroy in China on Monday.