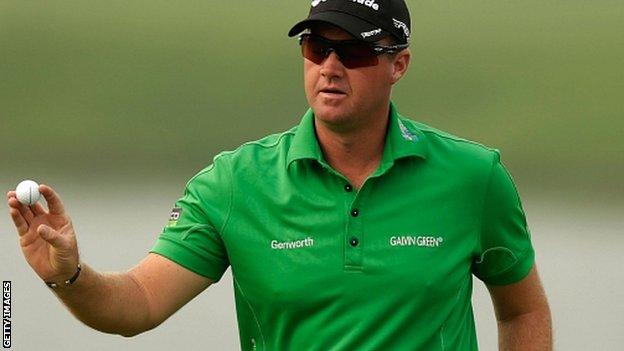 Peter Hanson resisted a late charge from Rory McIlroy to win the BMW Masters in Shanghai by one shot.

The 35-year-old Swede, one ahead of the world number one overnight, held his nerve on the final hole to secure his sixth European Tour victory.

Hanson led by four with five to play but McIlroy eagled the 15th and birdied the 16th to ensure a nervy finish.

To go head-to-head with the world number one is always nice, but to come out on top, it feels great

But McIlroy has extended his lead at the top of the standings to boost his chances of emulating Donald's achievement of 2011 in winning both the European and US Tour money lists in the same year.

A thrilling finish was in prospect when McIlroy eagled the 15th from 25 feet, birdied the next to narrow the gap to two and saw Hanson find sand at the short 17th.

The world number 25 saved par from 15 feet, but still had a scary moment when his approach to the last came down in the bank of a bunker.

After being refused relief for a plugged lie, he did well to chip to 10 feet and two putts for bogey - his only dropped shot of the day in a 67 - were good enough after McIlroy, who also posted a 67, had just missed his 15-foot birdie attempt from the back fringe.

"Rory's second shot into the 15th was pure class and he put quite a bit of pressure on me, even though I had a bit of a cushion," said Hanson. "I played a little bit too defensively but it all worked out in the end.

"To go head-to-head with the world number one is always nice, but to come out on top feels great.

"This is by far my biggest win as we had so many guys in the world's top 10 here."

McIlroy, who is not playing at next week's World Golf Championship event in Guangdong, China, where another Hanson victory would lift him above McIlroy in the money list, had to settle for his ninth second-place finish on the European Tour.

"I didn't get the best of starts but it started coming together over the back nine," said the 23-year-old. "I was aiming to make him work for it.

"It would have been nice to hole that (birdie) putt on the last to have him think a little bit but it wasn't to be. He played well and deserved his win."

Poulter got to within three shots of Hanson after picking up three strokes in his first seven holes and holing birdies at the 10th, 11th and 13th to join McIlroy, who had dropped two shots early on before fighting back, on 15 under par.

The English Ryder Cup star sank another birdie on the 15th to reach 16 under before a missed 10-footer on the 16th ended his challenge and carded a seven-under 65.