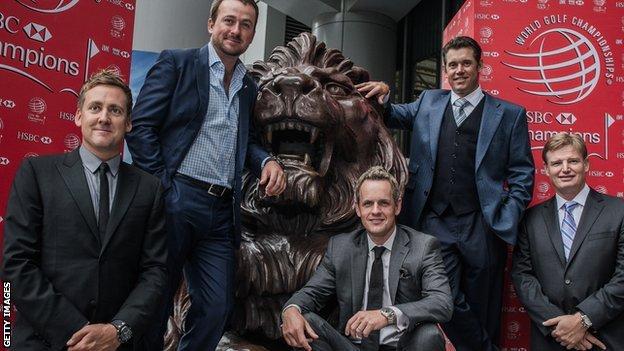 Rory McIlroy and Tiger Woods are notable absentees from a strong field at the WGC Champions in Dongguan.

The top two in the world played a head-to-head exhibition event in the Chinese city of Zhengzhou on Monday.

Sponsors' spokesman Giles Morgan said he was "disappointed" but that both men had privately apologised.

In their absence, 13 of the world's top 20 will compete, with Peter Hanson and Justin Rose able to pass McIlroy at the top of the European money list.

Swede Hanson cut McIlroy's lead at the top of the Race to Dubai with victory at the BMW Masters last weekend.

"Hopefully, I can keep this form going and be up there again Sunday because I will need to keep playing like I did last week to have a chance of catching him, given how well he is playing this year," said Hanson.

Rose, who won the European Tour money list in 2007, lost ground in Shanghai, finishing in a tie for sixth as McIlroy came second behind Hanson.

The Englishman, who is not scheduled to play again before the end-of-season Dubai World Championship, said: "I have to win this week to give myself that chance.

"From the Road to Dubai perspective, to keep that interesting, it's a very important week this week."

McIlroy has already claimed victory on the PGA Tour money list and is bidding to emulate Luke Donald's 2011 achievement of topping the tours on each side of the Atlantic in a single year.

Open champion Ernie Els sympathised with McIlroy's decision to skip the event at Mission Hills, but lamented the absence of the Northern Irishman and world number two Woods.

"You can't play everywhere," said the South African. "I don't know why they are skipping because it's a wonderful event. It's unfortunate they are not here."