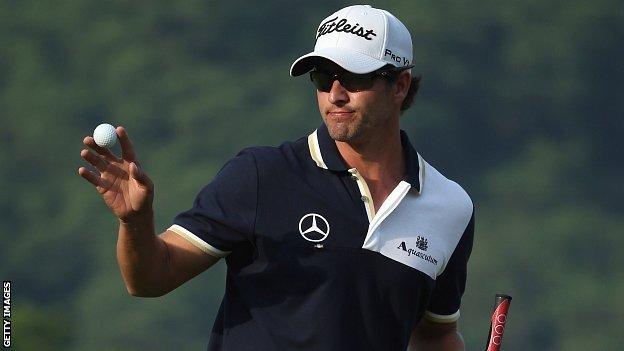 Adam Scott and Louis Oosthuizen share the lead after the first round of the WGC-HSBC Champions in Shenzhen, China.

American pair Bubba Watson and Phil Mickelson are in a tie for third.

Thirteen of the world's top 20 players are competing, although world numbers one and two, Rory McIlroy and Tiger Woods, are absent.

World number three Luke Donald is the highest-placed British player on four under par, one ahead of fellow Englishman and world number four Lee Westwood.

Ireland's Shane Lowry, who qualified by winning the Portugal Masters three weeks ago, had looked like stealing the show after reaching eight under after 16 holes.

But bogeys at the 17th and 18th dropped him into a share of third, with Watson, Mickelson and Sweden's Peter Hanson, winner of last week's BMW Masters.

"It's gotten better each week since the PGA Championship and hopefully I can carry on - I certainly feel confident that I will be able to."

After holding off world number one McIlroy last weekend for the best win of his career so far, Hanson has a chance to overtake the Northern Irishman on the European Tour money list with only three weeks left in the race.

England's Justin Rose, third on the European Tour money list and who also has an opportunity to take top spot this weekend, had to be content with a 72.