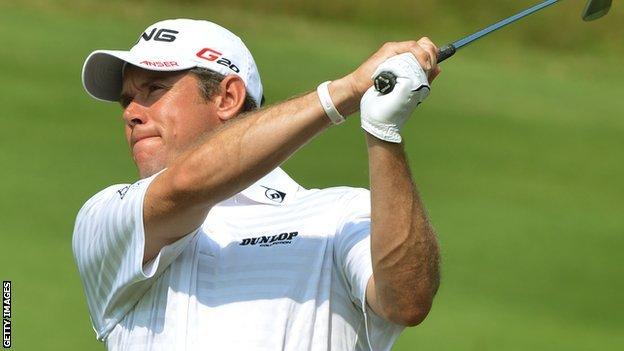 Lee Westwood carded an 11-under third round of 61 to take a share of the lead at the WGC Champions in Shenzhen.

The world number four joined previous leader Louis Oosthuizen, who missed a birdie putt on the 18th, on 18 under, three shots clear of Phil Mickelson.

Brandt Snedeker would have had a 59 had he not missed on the last, instead settling for a course-record 60.

"The course is in great condition and we're starting to get used to playing it," said Westwood.

"As the week has gone on and we've played it and walked it, we're starting to see lower and lower scores."

The former world number one began the day nine shots off the lead but birdied the opening three holes, the first of 11 in total, as he found some consistency with the putter in China.

"I just wanted to come out fast and try to get some momentum, that's been missing from my game the last couple of weeks," he added.

"I came out as quick as you like with three birdies, and that got me going and the hole started to look bigger."

In contrast, 2010 Open champion Oosthuizen, who shot 63 on Friday to go 16 under after two rounds, paid the price for too many mistakes on the green with a round of two under.

Westwood and Oosthuizen will start the final round with three shots between themselves and Mickelson, who is a shot ahead of Ian Poulter, Bill Haas and Ernie Els, the South African briefly sharing the lead before finding water on the 15th.

Snedeker is a further one behind, the American setting the course alight playing in the first group of the day.

"I'd love to have that putt again," said Snedeker.

"I hit a great putt and it stinks not doing it [scoring 59] but it's still a great round and I got back in the golf tournament, which is nice."

England's Luke Donald is seven shots off the lead after a 69, while compatriot Justin Rose, who could have replaced Northern Ireland's Rory McIlroy at the top of the European Tour money list with victory, is down in a tie for 26th on seven under.

Sweden's Peter Hanson, another who had the opportunity to overhaul McIlroy, is a further shot back.