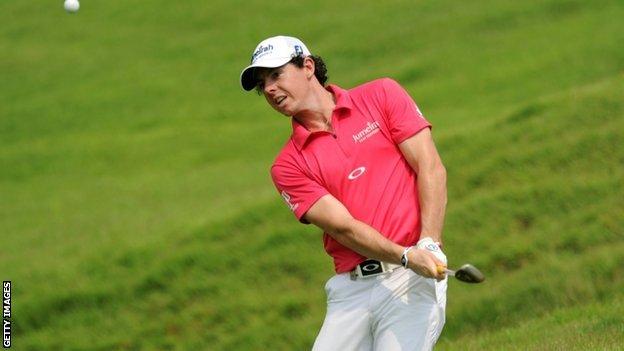 Rory McIlroy's opening round at the Singapore Open was cut short by a thunderstorm as Denmark's Thomas Bjorn set the pace with a five-under-par 66.

The world number one, who is leading the United States' PGA Tour money list, is attempting to emulate Luke Donald by also winning Europe's Road to Dubai.

The 23-year-old was level par after eight holes when play was halted with half of the 156-field on the course.

Last year's tournament was cut to three rounds because of torrential rain.

McIlroy needs a top-three finish in Singapore to win the European money list because his main challengers - second-placed Justin Rose and third-placed Branden Grace - are not playing.

They will also miss next week's event in Hong Kong where McIlroy will be the defending champion, with only the season-ending DP World Tour Championship in Dubai to follow.

The Northern Irishman, who on the eve of the tournament defended his decision to miss last week's WGC Champions event in China so he could watch his girlfriend, tennis player Caroline Wozniacki, play in the Tournament of Champions in Bulgaria, opened with a bogey.

However, he birdied the fourth and fifth before dropping his second shot of the round at the par-three eighth, shortly before the sirens sounded to end play with dark clouds approaching.

Bjorn, who started on the 10th, birdied his opening hole and three of his last six, with his only bogey coming on the par-four third.

He leads three players, including England's Simon Khan, by one shot - Khan also holed six birdies but dropped shots on the 16th and 18th stopped him sharing the lead.

Fellow Englishman Paul Casey, whose last three finishes have been third, fifth and sixth, continued his solid form with a three-under 68.

"The golf has been really nice lately and I'd love to sneak a win in before my season finishes," he said.

"It's the first time I've played in this kind of humidity for a long time. Just hanging on to the club with sweaty hands is the biggest problem."

The 78 players unable to post a score on Thursday are scheduled to resume their opening rounds at 23:30 GMT (07:30 local time on Friday).