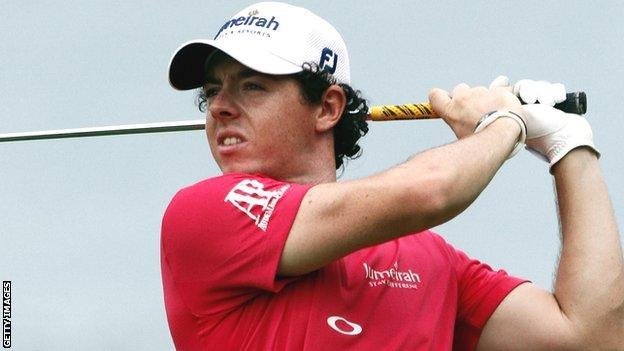 Rory McIlroy finished the day as he started - five off the pace at the weather-affected Singapore Open.

After completing a second-round 70 to stand on two under, McIlroy improved to four under after nine holes of his third round when played was halted.

That left him five adrift of Thomas Bjorn, who had played three holes.

Michael Hoey moved into contention on four under after a second-round 66 but successive double bogeys then dropped him back to level par after four holes.

Hoey's six-birdie 66 had left him only five behind leader Bjorn but he produced an untidy opening four holes before darkness halted play as an immediate bogey was followed by a birdie and the successive double bogeys.

Shane Lowry missed the cut by one shot on two over after a second 72 while Padraig Harrington (73) and Peter Lawrie (76) also exited on five over and six over.

McIlroy, who has been bothered by a cold in Singapore, was one under after 12 holes of his second round when he began on Saturday and he picked up one shot in his closing six holes to card a second straight 70.

A birdie and an eagle inside the opening four holes then moved McIlroy to within touch distance of Bjorn on five under but the world number one's progress was halted by a double bogey at the sixth although he did reply with an immediate birdie as he finished the day on four under after nine holes.

McIlroy, who will slim down his schedule to 22 or 23 events next year, has had an impressive season and is on course to top both money lists.