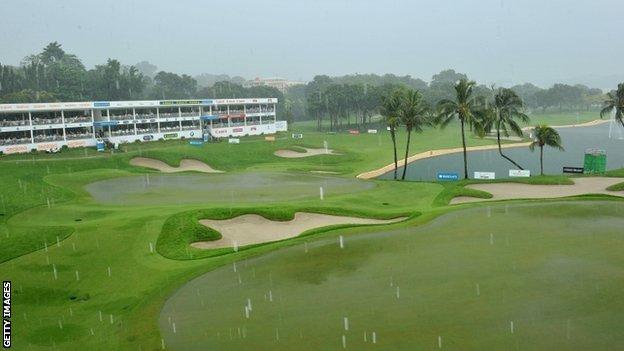 Half of the field did not start round two on Friday and some greens were under water with more rain forecast.

England's Simon Dyson birdied four of the 13 holes he played to lead on six under with Thailand's Chapchai Nirat.

World number one Rory McIlroy, who needs a top-three finish to win the Race to Dubai, is one under after 12.

Lighting and heavy rain caused two suspensions before play was finally called off. Last year's event, won by Gonzalo Fernandez-Castano in a play-off, was cut to 54 holes and only finished on the Monday morning.

"However, if we do suffer more delays we would then decide, in consultation with the sponsor and promoter, whether to reduce the tournament to 54 holes or complete the fourth round on Monday."

McIlroy, who finished his first round in one-under-par 70 on Friday morning, birdied his last hole of the day to improve to joint 29th.

The Northern Irishman had looked in danger of missing the cut after bogeying his third hole of the second round, the 12th, and following that with a double-bogey six on the par-four 13th to slip to two over.

However, the 23-year-old picked up birdies on the 18th, first and third holes to move back into contention with six holes left of his second round.

Dyson's share of the lead will be short-lived when play resumes at 23:30 GMT on Friday (07:30 local time on Saturday) because the siren to halt proceedings was sounded before he had chance to knock in a bogey putt on the fifth (his 14th).

Nirat, who is ranked 631st in the world, completed a bogey-free 65 on Friday morning to take the first-round lead and mixed a couple of birdies with a couple of bogeys to remain six under after nine holes of round two.

Denmark's Thomas Bjorn, who led on five under at the end of day one, is among the 78 players who were unable to tee off in the second round.

Molinari is yet to drop a shot in his second round, having birdied three of his 12 holes while Manassero recovered from an opening-hole double bogey to record six birdies in 11 holes.

England's Chris Wood improved his score to four under with three birdies in the eight holes he was able to complete.

He joined compatriot Simon Khan, who also did not tee off, in joint sixth, while Paul Casey (three under) was another who stayed in the clubhouse.