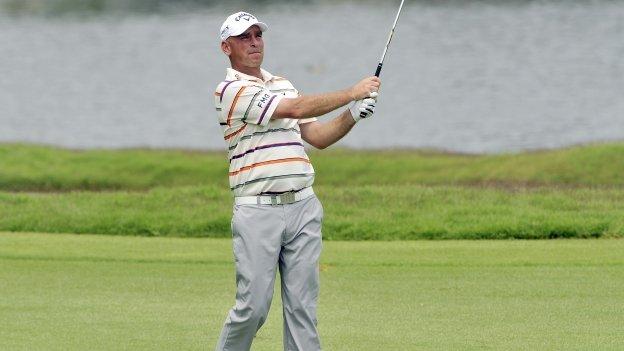 A steady performance by Denmark's Thomas Bjorn saw him take a one-shot lead in the early stages of the third round of the Singapore Open.

But the Ryder Cup vice captain is being chased by England's Chris Wood.

Bjorn shot a second-round 68 to move to nine under and then parred the first three holes of his third round.

Wood managed a 65 and then picked up a further shot in his third round to lie on eight under before play was suspended because of bad light.

Tournament organisers have been playing catch-up after three lengthy suspensions due to heavy thunderstorms. Players only started their third round on Saturday afternoon but officials are still planning to finish both the third and fourth rounds on Sunday unless storms cause more delays.

South Africa's George Coetzee is a shot behind Wood thanks to a 63, the lowest round of the week, while world number one Rory McIlroy picked up two shots on the back nine of his third round to move to four under, five shots behind Bjorn.

Bjorn has not dropped a shot since the first round and has attributed the low score to his accuracy with the driver.

"This course doesn't really offer you that many wedges," he told reporters after finishing his second round. "Your mid-irons have to be on but driving is also essential on this course. You need to get off the tee well and I've done that for two days."