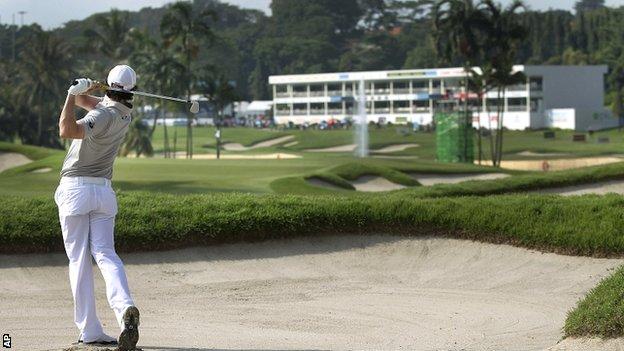 The 23-year-old USPGA champion emulated Luke Donald's achievement last year of finishing top of the list in Europe and the United States in the same season.

He closed with a 30-foot eagle putt for a 65 to edge one shot ahead of Thomas Bjorn at 10 under at the Sentosa Club.

Louis Oosthuizen and Matteo Manassero were both 13 under, Manassero winning the event at the third play-off hole.

McIlroy has now won in excess of £2.8m in the Race to Dubai, which replaced the European Tour's Order of Merit in 2009, and cannot be overhauled, despite two tournaments still remaining in this year's calendar.

The Northern Irishman, who began his European Tour campaign with two top-five finishes in the Middle East and finished in the top three in his final two events, played down his feat and insisted: "The money list has been cheapened a little bit by not having the leading players at events towards the end of the year.

"It's still an award for consistency and you need to play well throughout the year in all the tournaments you attend.

"I am going to end up playing 13 or 14 events on the European Tour this year. That's obviously a lot less than a lot of other people but I have played in the bigger tournaments with the higher prize funds, which has allowed me to get to the top."

A large percentage of the third round had to be finished at first light on Sunday and Manassero, who had 15 holes to complete, was in a group of seven players at five under, four shots behind Bjorn.

He began with four successive birdies and added two more on his back nine to sign for a bogey-free seven-under 64 and a two-shot advantage over Oosthuizen, with McIlroy in a share of 13th seven shots adrift.

McIlroy carded four birdies in addition to his eagle to propel himself up the leaderboard into the third place he required to secure the Race to Dubai crown.

Former Open champion Oosthuizen could have denied him had he won the tournament, and the South African birdied the 18th after a superb pitch to within a foot.

However, 19-year-old Manassero forced a sudden-death play-off by two-putting from 60 feet for a closing birdie.

Oosthuizen saw a four-foot putt for the title spin out of the cup as the 18th was halved twice in extra holes, and it was Manassero who celebrated his third European title with an eagle from 12 feet when the pair played the 542-yard par five for a third time.