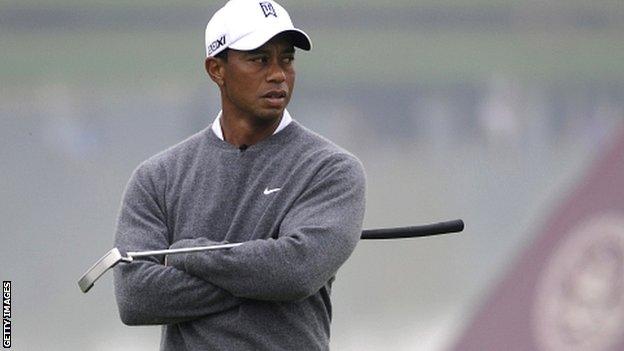 Sir Nick Faldo believes it is unlikely Tiger Woods will break the record of 18 major titles held by Jack Nicklaus.

"I think it's slim, people want a yes or no, I'd lean towards no," said Faldo, who won six major titles.

Sure he can come back and do things but it won't be as dominant, like he was

"As you get older the little demons sit on your shoulder, you've seen one too many bad shots at the wrong time, and it starts to eat away at you."

In addition to his much fabled problems in private life, which saw him take a five-month break from golf, Woods, 36, has been plagued with knee and Achilles injuries in recent seasons.

But having overcome fitness problems this year, he began to show signs of a return to his best form, and claimed his first professional title since September 2009 when he won the Bay Hill Invitational in March.

His form in the majors was less predictable, however, and he suffered his worst finish as a professional at the Masters with a share of 40th and he was tied 21st at the US Open.

At The Open at Royal Lytham he opened with two 67s and finished joint third, while in the final major of the season, the USPGA won by Rory McIlroy, he was tied for 11th.

"A lot of people thought he would just deal with it (private life problems) and get back on the golf course but he seriously mentally scarred himself and it's not going to be as easy as people think.

"He wrecked that wonderful tranquillity you get of going to the golf course on a practice day and tipping out a bag of balls and just thinking of golf.

"There was probably a time when he hated that cell phone because there would be lawyers, accountants and managers and all sorts. It shattered that wonderful peace and he won't get that back.

"Slowly things have changed in his golf swing - physically, mentally, technically - and it's a harder climb right now.

"Sure he can come back and do things but it won't be as dominant, like he was.