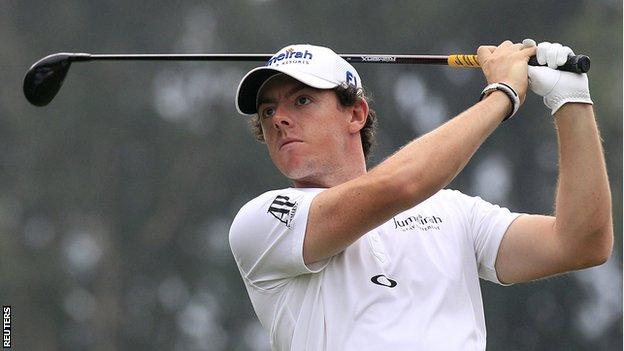 Rory McIlroy found himself nine shots behind a player 506 places below him in the world rankings after Thursday's first round at the Hong Kong Open.

Defending champion McIlroy managed only one birdie in his 73 to be just inside the top 100 on three over par.

Spaniard Javi Colomo shot a 64 to lead compatriot Miguel Angel Jimenez by one.

Little-known Colomo qualified through his Asian Tour ranking, having failed to come through the European qualifying school on three occasions.

The 28-year-old actually began with 10 pars in a row, but had five birdies in the next six holes before finishing finished his day's work with a four-foot putt for another birdie.

World number one McIlroy was hoping to put even more of a gloss on a season in which he won his second major title and topped the money lists on both sides of the Atlantic.

But he started with a bogey, turned in one over, made a mess of his approach to the 14th and three-putted from the fringe of the next.

It could so easily have been Jimenez's day, but after seven birdies the 48-year-old, twice a winner of the title and now trying to become the European Tour's oldest-ever champion, finished with two bogeys.

Australian Andrew Dodt matched Jimenez's 65 to lie one ahead of a group of five players on the four-under 66 mark which included Ryder Cup captain Jose Maria Olazabal.

Scot Paul Lawrie stood three under until he found water at the last and carded a double-bogey.

Paul Casey overcame two double-bogeys for a level-par 70, one better than Padraig Harrington.