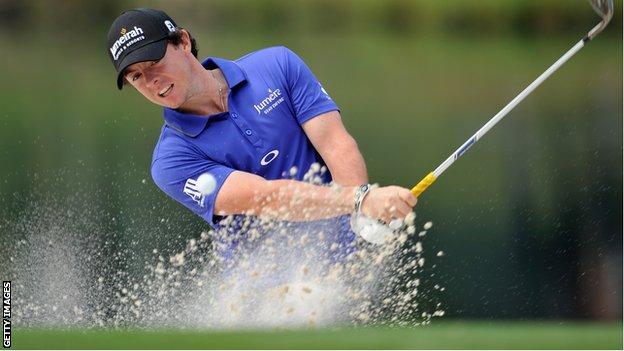 Rory McIlroy missed his first cut since June after a poor finish to his second round at the Hong Kong Open.

The world number one was four under after 11 before carding four bogeys and a double-bogey at his last hole for a 72 to end on five over.

"I got on a slide and couldn't stop it," said defending champion McIlroy.

Former US Open champion Campbell continued his recent revival, from 910th in the world four months ago to 339th.

The former US Open champion went to the turn in 30, made it four birdies in a row on the 10th and added another from 10 feet at the last to reach nine under.

That put him one ahead of twice winner Jimenez and China's Zhang, aged 48 and 47 respectively, and Swede Hed.

Defending champion McIlroy looked to have done what he needed to do when he had four birdies in his first 11 holes to climb to one under par in the tricky wind.

But then came four bogeys in the next five and, with his survival in the balance, a closing four-putt double-bogey six at the 367-yard 10th.

"Obviously not the week that I wanted. I was only four off the lead and thinking I could make a couple more and be right back in contention. Unfortunately, it just went the other way," added McIlroy.

"On the last I saw the projected cut was plus two, so I wanted to try to hole it (for birdie). I hit it a few feet by, then really knew the second putt was to make the cut."

After missing that one he admitted he lacked concentration on the next and failed again.

"I feel like I'm hitting the ball pretty good still and I think these couple of days off might actually do me good and give me a little bit of a chance to rest," he said.

"I didn't putt well in Singapore last week and sort of got away with it. This week was the same, so I think a bit of putting practice is required in Dubai."