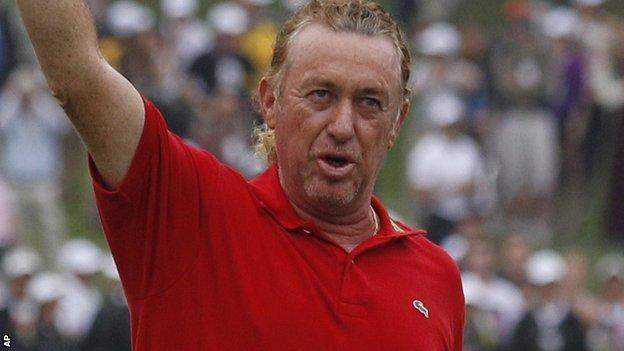 Miguel Angel Jimenez became the oldest winner on the European Tour by clinching victory in the Hong Kong Open at the age of 48 years and 318 days.

The Spaniard hit a final round 65 to beat Sweden's Fredrik Andersson Hed, who had hit a 64, by one shot.

He is 284 days older than Ireland's Des Smyth was when he lifted the 2001 Madeira Islands Open.

"It's always an honour to make records and I hope it's not the last one," said Jimenez.

He now has three Hong Kong title wins in his 19 European Tour triumphs and added: "The way I am playing and handle myself I can be fit to win another one."

The Malaga-based golfer carded only two bogeys in four rounds of 65, 67, 68 and 65 on the way to victory. He said: "Distance does not matter here. I controlled the ball well and gave myself many chances for birdie which you have to do here."

Michael Campbell was in the overnight lead with Jimenez but the New Zealander finished eighth after a two-over 72.

The 43-year-old was trying to win his first tournament since the World Match Play Championship seven years ago.

World number one Rory McIlroy had on Friday at five over.

Australian Marcus Fraser's final round 64 lifted him up to third place, while Matteo Manassero, the 19-year-old who won the Singapore Open last week, was fourth along with Scotland's Stephen Gallacher and Ireland's Peter Lawrie.