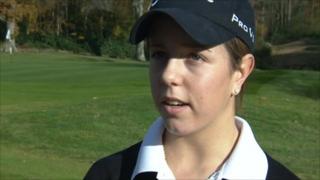 It has been a whirlwind 12 months for a Bournemouth golfer, who has gone from talented teenager to one of the best amateurs in the world.

Georgia Hall, 16, has surged up the world amateur rankings after winning the British Girls Championship and is determined to achieve her goal of turning professional.

"I always wanted to be like Rory McIlroy and turn professional at 18 and go on from there," Hall told BBC South Today.

Hall, who is the only junior member at Remedy Oak Golf Club in Verwood, has won three major tournaments this year, lifting her to fourth in the world rankings.

"It's been really good year," added Hall, who came runner up in the English amateur championship.

"I've been very consistent, had some good wins and it's been a great experience playing some big competitions which I'm going to learn from."

Hall is also targeting the 2014 Curtis Cup team having been left out of the event this year.