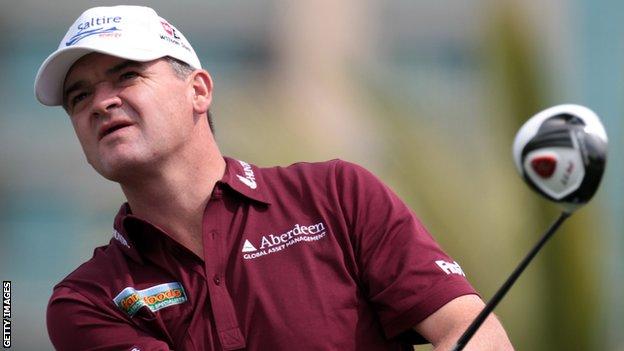 Paul Lawrie credits a second-place finish in last year's DP World Tour Championship in Dubai as the springboard to his golfing renaissance.

And the 43-year-old from Aberdeen is determined to build on a great 12 months by improving further.

"This week last year was the start of getting back up there," he said on the eve of this year's event in Dubai.

"To nearly win a tournament of this quality with the field we had was a huge boost for my confidence."

The 1999 Open winner had been struggling, breaking a near-nine year trophy drought to win the Andalucian Open in March 2011.

And, following his good display in Dubai, Lawrie was a model of consistency in 2012 - going on to record nine top-10 finishes, including victories at the Qatar Masters and the Johnnie Walker Championship in Scotland.

"It was just a snowball effect at the start of the year," he told BBC Scotland. "Every week I played, I seemed to be in contention to win.

"I had been working hard on my short game, especially with the putter, and I could see things slowly happening."

Lawrie's excellent form earned him a place at the Ryder Cup after a 13-year absence.

And he played his part in Europe's unlikely comeback victory over the United States in September, trouncing Brandt Snedeker during the dramatic final-day singles.

"It's been good, but you don't want to get carried away and you want to keep going," he added.

"I want to make next year even better. I don't want to put too much importance on this year.

"I was 18th in the order of merit in 2011 and I'm currently 10th, so it's an improvement and, if I can do better again next year, it's an even bigger step forward.

"The plan is to jump a few guys this week, but no matter where I finish it's been a good year."

The Greg Norman-designed Earth course that stages this week's tournament measures 7,675 yards and Lawrie believes it will play longer than it did last year.

"The fairways are a little softer, but I still think scoring will be pretty good," he explained.

"The greens are immaculate and, any time you give us greens of that quality, scoring is normally pretty good.

"These guys playing this week are world class at what they do, so I would imagine somebody will shoot something similar to last year."