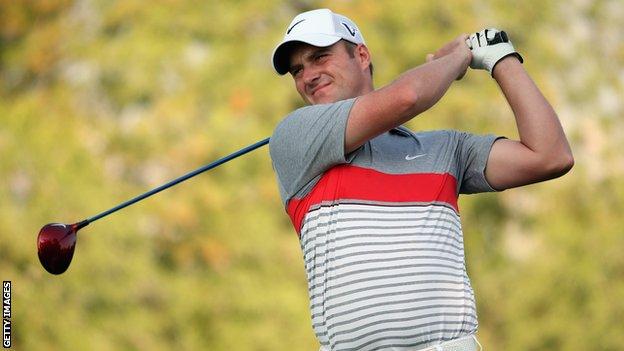 The Glaswegian, who trails current leader and world number two Luke Donald by one stroke, finished his opening round six under par on 66 at the Greg Norman-designed Earth course in the Middle East.

"It was nice to get off to a good start," said Warren.

The last few years I've had to sit at home and watch it, so it's nice to be on the other end of the camera this time.

"I birdied the first hole and continued the good golf from then on in."

Warren, Rory McIlroy and Spaniard Gonzalo Fernandez-Castano are one stroke ahead of several others tied third on five under, including fellow Scot Richie Ramsay.

Other countrymen Stephen Gallacher and Scott Jamieson are keeping in close quarters, too, with rounds of 68.

"It's always nice to be out early on a Thursday morning and see your name at the top of the leader-board," said Warren.

"I actually didn't know if we were going to be teeing off on time - the rain was that heavy this morning. So it was nice to get off on time and take advantage of the kinder conditions."

Paul Lawrie and David Drysdale are also involved in the competition, making it a six-strong Scottish presence at the European Tour season-ending event.

Drysdale ended his opening round at one under par on 71.

The 'Race to Dubai' culminates with this tournament in which the top 60 earners of the golfing season come together to battle for a share of $8m and a $3.75m bonus fund for the top 10.

Warren, who blew a lead at the Scottish Open in the summer and subsequently missed out on qualifying for The Open, birdied three of the first five holes in Dubai and explained how he was thrilled to be on the playing side of the camera.

"The last few years I've had to sit at home and watch it and it's not been good, so it's nice to be on the other end of the camera this time," he said.

"Pete Cowan, my coach, said to me to go out and enjoy each shot and don't try to be too perfect, which is probably one of my guilty traits.

"He said that I deserve to be here and just to go out and enjoy the reward of actually being here in a tournament like this."

Meanwhile, Richie Ramsay was delighted to return to the clubhouse five under par on 67, which sees him share third position after day one.

At the greens, the Aberdonian had some frustrating lip-outs on the front nine, but on the whole was pleased with his putting.

"I was hitting really good putts and I managed to get a few on the back nine which is going to make lunch taste a lot better.

"It was fun out there and a nice way to finish the first day and get off to a good start."

The number of Scots in contention encourages Ramsay, but he's not getting ahead of himself yet.

"It's nice to have the Scots up there, but I've just got to take it one day at a time and have the attitude that I'll just go out there and enjoy it," he said.

"On Sunday afternoon we'll see where we are. Hopefully, if we can play like today, it should be a good result."