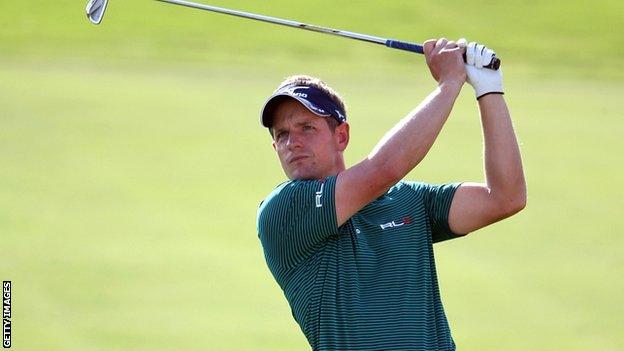 Luke Donald shot an impressive seven-under-par round of 65 to take a one-stroke lead after the first day of the DP World Tour Championship in Dubai.

The 34-year-old, who moved up to world number two after winning in Japan last week, had seven birdies and no bogeys.

World number one Rory McIlroy, who missed the cut in Hong Kong last week, had five birdies on the back nine and is one of three players sharing second.

The final event of the European season, at the Greg Norman-designed Earth Course on the Jumeirah Golf Estates, is limited to the top 60 money-winners on the circuit this year, but only 56 were able to start.

Thomas Bjorn and Retief Goosen are injured, Ross Fisher is preparing for next week's PGA Tour qualifying school in California, and on Thursday morning Ireland's Shane Lowry withdrew because of a virus that briefly led to him being put him on a drip in hospital.

For the first time since the Ryder Cup at Medinah in September, all 12 members of the victorious European team are competing in the same field.

McIlroy recovered superbly from some tricky situations, notably at the 18th after his drive found the creek down the left of the fairway.

After laying up short of the green he played a majestic pitch and holed for a par, his 13th single putt of the round.

"I feel I drove the ball beautifully, with the exception of the 18th, and if I can continue to do that for the next three days I'll have a good chance," the 23-year-old said.

There can be no doubting Rory McIlroy's desire to finish the year on a high. The 23-year-old is determined to win and his appetite has not been diminished by the fact he has already wrapped up the Race to Dubai.

He faces the prospect of hunting down Luke Donald and the top two in the world fighting out the closing tournament would provide a fitting finale to an excellent year for European golf. Half of the victorious Ryder Cup team are within three strokes of the lead and this has the makings of a thrilling tournament.

The 31-year-old, whose last victory was in 2007, began his day with a "mad rush" to find his waterproofs after seeing 20mm of rain fall in two hours, but the rain soon gave way to clear blue skies and he had perfect conditions for his round.

"There was no wind to speak of and the greens were pure," he said.

Meanwhile Donald, who is planning an 11-week break from tournament golf after this event, made all seven of his birdies between the fifth and 14th holes, the latter a 626-yard par-five where his eagle putt brushed agonisingly past the cup.

"I felt like I couldn't miss. I hit some really good irons shots too and it's fun when it seems that easy," he said. "I feel like I'm swinging it pretty well and have a lot more control of the golf ball. I need an extended period of time to solidify some things in my swing."

Westwood, who has parted company with caddie Billy Foster and announced Zimbabwean Mike Kerr as his permanent replacement, won on the Earth course in its first year in 2009.

The 39-year-old dropped a shot at the opening hole, but birdied the 16th and par-three 17th before missing a five-foot birdie putt on the final green that would have given him a 66.

In his first event since eye surgery to correct an astigmatism after the Ryder Cup, Sergio Garcia opened with a 73.