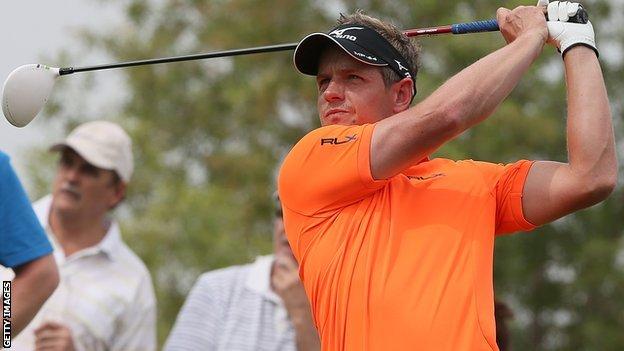 Luke Donald and Rory McIlroy share the lead going into the final day of the DP World Tour Championship in Dubai.

In the final European Tour event of the season, McIlroy and Donald, who are first and second respectively in the world rankings, are level on 17 under.

Both men carded 66 on Saturday and are three shots ahead of South African duo Charl Schwartzel and Louis Oosthuizen.

Donald's record of 100 holes on this course without dropping a stroke is an extraordinary statistic.

Having found something on the range to correct a swing fault during his victory in Japan last week, he has played with great efficiency in this season-ender.

McIlroy, by contrast, has been overpowering the course. Their differing styles will make for captivating viewing in the final round with the Northern Irish number one determined to emphasise his position as top dog in the 2012 finale.

McIlroy, who won the US PGA Championship in August, bogeyed the first hole on Saturday, but recovered with five birdies and an eagle at the par-five 14th despite feeling ill.

He said: "I was taking painkillers throughout the day as I have had a bad fever and been up since 4am.

"I wasn't feeling great when I woke up this morning but when you're out there and playing, the adrenaline gets you through.

"At one stage Luke was three or four ahead of me and I just wanted to keep it close so it's great that I'm level going into the final day."

Donald finished third in this event last year and he has now played 100 holes in this tournament without a bogey after another flawless round.

He could become the first player to win a European Tour event without dropping a stroke since Jesper Parnevik at the 1995 Scandinavian Masters.

"I didn't get into too much trouble and I minimised the mistakes," said Donald, who won the Dunlop Phoenix tournament in Japan last week.

"It's going to be fantastic final day and a great end to the European Tour season."

Warren, who began the third round level with Donald and McIlroy at the top of the leaderboard, shot a level par round of 72 which included three birdies and three bogeys.