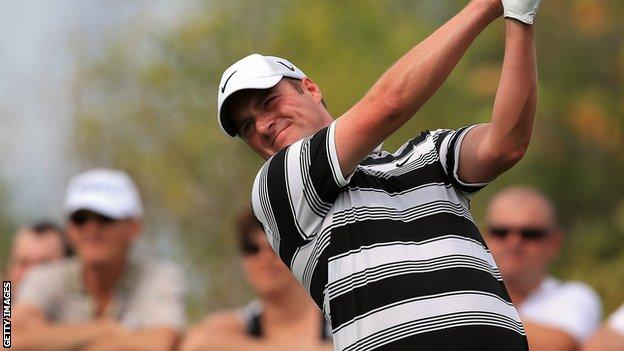 Scotland's Marc Warren had a steady third round but slipped off the lead at Dubai's DP World Tour Championship.

The Glaswegian topped the leaderboard overnight with Rory McIlroy and Luke Donald, but hit a par round of 72 to sit joint seventh on 11-under.

"I played pretty well today apart from a couple of mistakes," said Warren.

"I didn't take advantage of the par fives, so that was a little bit disappointing. There's a bit of room for improvement there."

McIlroy and Donald remain tied in first on 17-under at the Greg Norman-designed 'Earth' course.

Warren, ranked 189th in the world, had to adapt to different weather but finished his round positively out of a bunker at the 18th.

"Tougher conditions today," he told BBC Scotland. "The wind was stronger and from a different direction than we had the first few days.

"A 40-yard bunker shot is probably as tough as it gets in golf.

"To hit that to three feet and hole the putt was nice after making birdies at 16 and 17 to get back to level par for the day."

The 'Race to Dubai' culminates with this tournament in which the top 60 earners of the golfing season battle for a share of $8m and a $3.75m bonus fund for the top 10.

The season-ending event of the European Tour features a six-strong group of Scottish golfers in the Middle East.

Going into the final day on Sunday, Ramsay is the next best-placed Scot on eight under par.

"If I can shoot a good number tomorrow I'll be alright," Ramsay told BBC Scotland.

"I played decent out there but I've just got to out and focus on my own game.

"I've taken a lot from the first two days but I've got to finish it off tomorrow."

Elsewhere, Jamieson is one stroke behind Ramsay on seven under.

Gallacher sits at six under, Europe Ryder Cup team member Lawrie on three under and David Drysdale on one under.