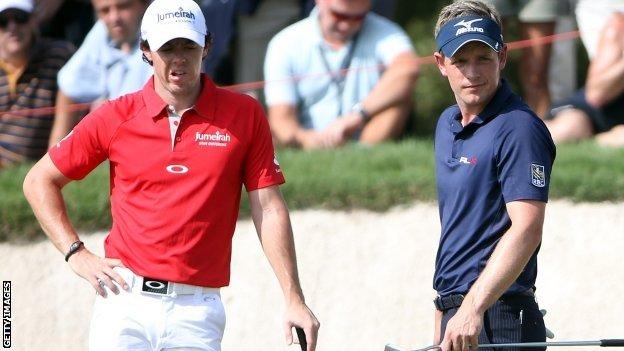 The European Tour is introducing a new £19m climax to the 2013 Race to Dubai with a 'Final Series' of four events.

The four tournaments are the BMW Masters and HSBC Champions in China, the Turkish Open in Antalya and DP World Tour Championship in Dubai.

Players will only be eligible to compete in the season-ending showdown if they play in two of the first three.

If they participate in all three then their points on the Race to Dubai money list will receive a 20% bonus.

"We felt there had to be an additional level of commitment from the membership to these important tournaments, hence the new regulation," said European Tour chief George O'Grady.

Of the 45 scheduled events for 2013, England will host just one, the BMW PGA Championship at Wentworth on 23-26 May, while the Wales Open at Celtic Manor switches from the end of May to the end of August.

Spain drops from seven tournaments to just one, reflecting the financial pressures the country is facing, although Miguel Angel Jimenez - who last week became the circuit's oldest-ever winner at 48 - is still hoping to continue with the Andalucian Open he promotes.

The 2013 Race to Dubai will begin with the Nelson Mandela Championship in South Africa from 6-9 December - the first of six to be staged in the country.

This season's money list was won by Northern Ireland's world number one Rory McIlroy two weeks ago, when he finished third at the Singapore Open.