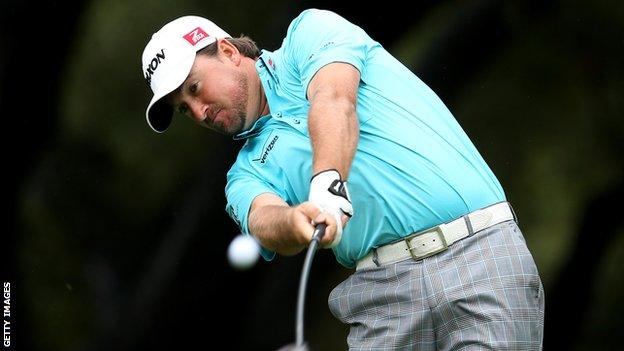 Northern Ireland's Graeme McDowell shot a stunning six-under par round of 66 to take a three-shot halfway lead at the World Challenge in California.

The 2010 US Open champion got off to a dream start, birdieing his first three holes, before dropping a shot at seven.

But more birdies were carded at 10, 13, 16 and 17 - enough for a nine-under par total, well clear of American trio Jim Furyk, Keegan Bradley and Bo Van Pelt.

Defending champion Tiger Woods is a further shot back after recording a 69.

McDowell started the day in a share of second place, two shots adrift of Nick Watney, and the 33-year-old picked up where he had left off.

Despite having a comfortable lead, McDowell said there was no room for complacency given the select field of 18.

"I fully expect somebody to shoot seven or eight under par tomorrow," he said, adding that he really enjoyed playing at Sherwood Country Club in Thousand Oaks because "there's always a ton of birdie chances on the golf course".

Of his main challengers, Van Pelt had a flawless round - sinking five birdies - until he dropped a shot at the last.

Bradley avoided any bogies in compiling a round of 69, while veteran Furyk had five birdies and two bogeys in posting the same score.

Another to shoot a three-under par round of 69 was Woods.

The 14-time Major winner made a customary charge up the leaderboard courtesy of four birdies in five holes from the ninth, but failed to sustain his challenge.

Given that he's only four shots behind McDowell, though, he will feel confident of launching a challenge to retain his title.