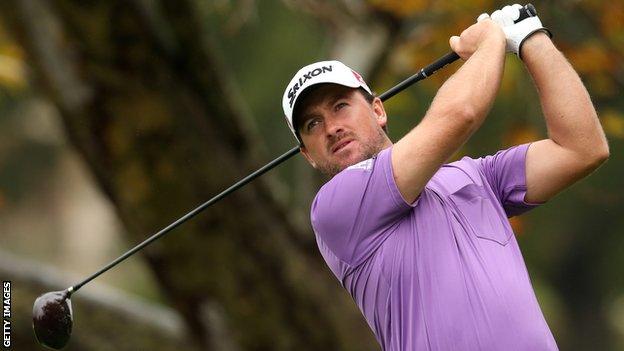 Northern Ireland's Graeme McDowell produced another fine display to take a two-shot lead into the final round of the World Challenge in California.

The 33-year-old, who won this tournament as well as the US Open in 2010, shot a four-under par 68 at Sherwood Country Club in Thousand Oaks.

He leads American Keegan Bradley, who carded six birdies in an impressive 67.

Northern Irishman McDowell's opening birdie of the third round came at the second hole, courtesy of a perfectly judged 27-foot putt, and his hot streak continued at the fourth as he sank an effort from 35 feet.

His iron play was also impressive - a beautiful 192-yard approach to within eight feet at the ninth created a third birdie.

Another followed at the 11th before seeing out the rest of his third round to par.

The man best-placed to challenge McDowell is 2011 US PGA winner Bradley, whose 67 represented the joint-best score of the third round.

Meanwhile, Woods kept alive his hopes of retaining the title with three birdies in four holes on the back nine, the highlight of which was a 30-foot putt at 15.

The 14-time Major winner's three-under par round of 69 leaves him eight under overall, alongside Van Pelt (70).