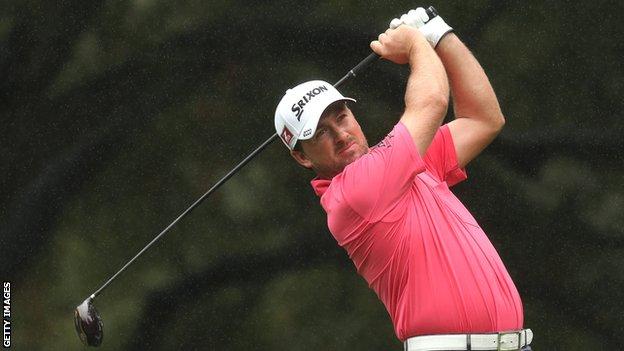 Northern Ireland's Graeme McDowell was a model of consistency as he picked up his second World Challenge title at California's Sherwood Country Club.

American Keegan Bradley (69) finished in second, three shots behind, while Bo van Pelt was third on 10 under.

Defending champion Tiger Woods (71) tied for fourth on nine under.

The world number three, who eagled the 16th after hitting his second shot on the par five from 252 yards to six feet, said he would be taking the next six weeks off before preparing for the 2013 season.

"I'm really looking forward to it, just having nothing to do with golf for a few weeks, put them [the clubs] away, enjoy the holidays and be with my kids," Woods stated.

"After that I'll start cranking back up again and start focusing on my shots.

McDowell, 33, without a tournament win since his victory at the same course two years ago, birdied the par-five second with a six-foot putt.

A 10-foot birdie chance was gobbled up at 10 and, at the next, McDowell canned a difficult 25-footer across the slope to further strengthen his grip on the trophy.

But a bogey six at 13 - only his third of the entire tournament - reduced his advantage to two shots.

By now it was clear that McDowell's only threat was going to be 2011 US PGA winner Bradley. Both men made birdies at the par-five 16th - the former from eight feet, the latter from two after a deft chip from the edge of the green.

Next came the downhill par-three 17th on to a small putting surface. And while Bradley safely made the centre of the green, McDowell found the deep rough at the back of it.

But a wonderfully controlled chip to within an inch of the cup saved his par, and when Bradley left his 40-footer short the man from Portrush knew he would be going up the 18th with a two-shot cushion.

And McDowell sealed victory in style, following up a laser-accurate approach with a sure birdie putt.

"This really caps off my season," he said. "We try not to put winning on a pedestal, but this one feels very sweet because it's been a grind all year.

"Certainly I will draw some confidence from this one. The game hasn't given me a huge amount this year."