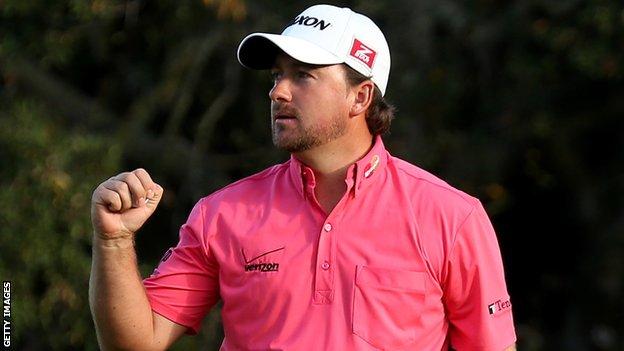 Graeme McDowell will take 10 weeks off after ending his 2012 season with an overdue victory at the World Challenge event in California.

McDowell had not won a tournament since his 2010 triumph at the Tiger Woods-hosted event in the US.

"I was running on fumes certainly around the Fedex play-offs and the Ryder Cup. I wasn't myself," said McDowell after his three-shot win over Keegan Bradley.

The 2010 US Open champion added that the victory at Sherwood County Club would put him into a "nicer frame of mind" going into the off-season.

"I've talked a lot about how frustrating this year has been off the back of some decent play.

"This one feels very sweet because it's been a grind this year.

"This will give me something to think about in the off-season and confidence to draw on into 2013," said McDowell, who has moved up 10 places in the world rankings to 14th as a result of Sunday's win.

Overnight leader McDowell hit a four-under 68 to end 17 under in the 18-man event.

American Bradley (69) finished in second, three shots behind, while Bo van Pelt was third on 10 under.

Defending champion Tiger Woods (71) tied for fourth on nine under.